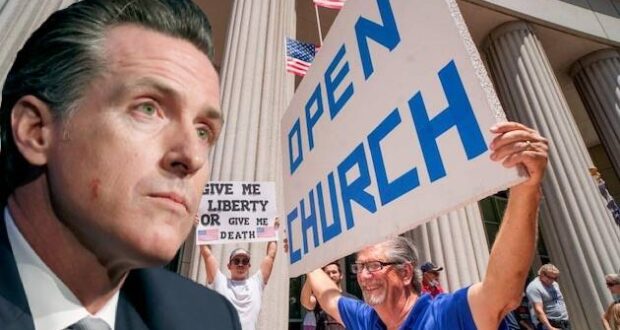 “In response to recent judicial rulings, effective immediately, location and capacity limits on places of worship are not mandatory but are strongly recommended,” the state’s revised COVID-19 guidance said. “The linked guidance is in the process of being updated. All other restrictions in the guidance remain in place.”

The Center for American Liberty, which brought three of the five lawsuits in which the Supreme Court ruled against California, lauded the move.

“Gov. Newsom should have done this a long time ago,” said Harmeet Dhillon, founder and CEO Center of the organization. “For over a year, the state of California has targeted the faith community for discriminatory treatment, depriving them of their fundamental right to worship. It shouldn’t take a decision from the Supreme Court, much less five decisions, for Gov. Newsom to realize that what he has been doing is unconstitutional.”

During an interview with Thomas More Society attorney Jenna Ellis, who has been representing Pastor John MacArthur’s Grace Community Church in its legal battles with Los Angeles County, Dhillon said, “This just reminds you how we are only one judge away from tyranny at any given point in our country, and millions of dollars had to be spent in attorneys’ fees to reach today’s result.”

She later noted that the tide began to turn in their direction only following the appointment of Justice Amy Coney Barrett to the high court.

“The latest opinion from the Supreme Court is a clear reiteration of its continued directive to governors and health officials across America that they cannot discriminate against houses of worship or treat people of faith with less protection than the U.S. Constitution requires,” Ellis said. “No alleged health crisis ever justifies suspending religious freedom or any of our most sacred rights in America.”

“The law that we obey first of all is the law of God,” said Jim Franklin, Senior Pastor at Cornerstone Church. “But the law that is in this land is the constitution of the United States.”

Cornerstone Church took part in one of several lawsuits against the State of California and Governor Gavin Newsom over religious freedom.

“What this does, is this vindicates us,” he said. “We have said all along that we have a constitutional right to meet and to worship.”

“This is a huge win for houses of worship,” said Franklin. “We have known from the very beginning that what the state of California did was unconstitutional and I am thankful that they have finally gotten the message from the United States Supreme Court and have decided to relinquish their position and allow churches to exercise their constitutional rights together to worship.”

“California treats some comparable secular activities more favorably than at-home religious exercise,” allowing hair salons, retail stores, and movie theaters, among other places, “to bring together more than three households at a time,” the unsigned order from the court said. A lower court “did not conclude that those activities pose a lesser risk of transmission than applicants’ proposed religious exercise at home,” it said.

Newsom faces a bi-partisan recall effort across the state. Millions of Democrats, Republicans and independents have signed a petition to put a recall vote on the ballot. The effort gained over 500,000 more signatures than necessary. Newsom, a Democrat, would become the second governor to be successfully recalled. The only other governor to be recalled was Democrat Gray Davis. He was replaced with Republican Arnold Schwarzenegger.