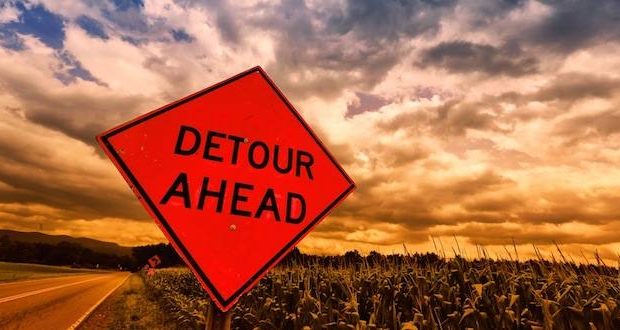 Cancer and a detour on the road of life

I sometimes find it hard to pray for, and comfort those with cancer. I felt I couldn’t possibly know what they were going through, the doubts they had or their fear of the unknown and the detour they felt in their lives.

My own diagnosis last week caught Anita and me by surprise. And it happened so fast.

Frightening symptoms, a doctor visit and then lab work, led to an urgent referral to the hospital for CT scans. And all in one day. My head was spinning.

It’s been 10 days of pain, painkillers, prayers and tears – by me and others around me.

Kidney cancer is a strange illness. It’s not discovered until serious symptoms appear by which time it’s often too big and too late.

There’s no cure other than I’ll lose the kidney which is really, now, just an ugly 4 inch tumor that has hijacked the blood vessels and transformed into an impostor organ. They’ll also remove the lymph nodes and biopsy the liver that now shows a “spot.”

After one sleepless night where panic gripped me and I convinced myself I would not make it through to morning, friends came and prayed over me about fear.

My friend John had been on that cancer detour himself. He knew.

I’ll start a new journey in life by way of my own detour. I will still pray for my friends with whom I’ve now become a fellow traveler on this road. But I’ll do so with a new understanding.

Now I understand why it was important for God to become man in the form of Jesus Christ.

“And the Word became flesh, and dwelt among us, and we saw His glory, glory as of the only begotten from the Father, full of grace and truth,” states John 1:14.

That humanity allowed Him to know and understand us, and let us know there’s a way out of the detour humanity had taken in its sin.

2 Corinthians 5:21 states, “He made Him who knew no sin to be sin on our behalf, so that we might become the righteousness of God in Him.”

The events of Easter Sunday put creation back on course.

I’m praying for a course correction from this detour of cancer – for others and myself.

Previous: Southwest Kansas is seeing fewer refugees, and a shift in the agencies supporting them
Next: Study: After an upbeat 1950s, pop songs have become dark, angry