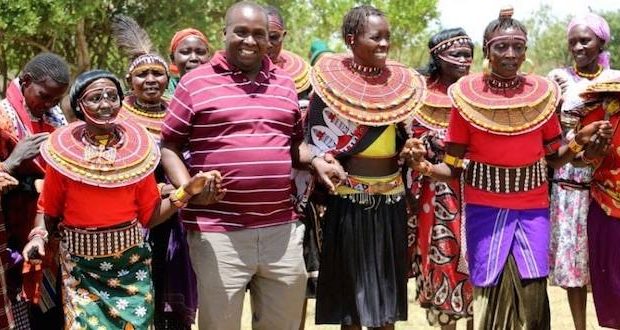 Can’t ‘hold it in’: Kenyan tribal chief brings Christ to his people, again

Geoffrey Lekopir couldn’t “hold it in.”

Already 42 years old when he came to Christ in 1999, he wanted his fellow Rendille tribe members to hear the gospel and know the love of Jesus too.

He was a local government chief in his hometown of Laisamis in Marsabit County, Kenya, so he had a platform and influence. Chiefs are among the most respected people in this region.

But he didn’t want to act alone, so he asked God for a partner.

As he prayed, he heard about the good things Timothy Kinyua and his team at Cornerstone Evangelistic Ministry were doing among the Turkana and Samburu tribes.

READ: African tribe dances for joy after getting Bible in own language

Like the Samburu, the Rendille are semi-nomadic and live in the harsh arid and semi-arid regions of northern Kenya. The Rendille raise goats, cows, donkeys, and camels. Their Muslim ancestors originally came from Ethiopia and Somalia. When they arrived in the region, they ceremonially burned the Quran and adopted the culture, language, and religion of the Samburu tribe.

Geoffrey decided to make the long journey to Meru, where Cornerstone is based, to meet with Timothy. He invited Timothy and his team to come share the gospel with the Rendille.

HELP IS ON THE WAY

Timothy and his team eagerly accepted Geoffrey’s invitation. It would be their first mission trip to Marsabit. For months they prayed for provisions to cover the travel cost and to hire a police escort for the team. Bandits lurked on the 190-mile journey from Meru. The unpaved, rugged, and rough road forced travelers to go slowly, making them easy prey. Theft and even murder were common.

It was a very hot, muggy night in April 2001 when Geoffrey finally welcomed Timothy and his team. They had two flat tires along the way, and the journey took 12 hours. Thankfully, they had carried extra gas and two spare tires on their old Land Rover, as is usual on African “bush vehicles.”

Geoffrey announced to his people beforehand that a film was going to be shown for four nights in four different villages. Many came the first night to watch the Jesus Film.

“It was the biggest crowd that I’ve ever seen by far,” Timothy happily recalled.

When the team preached and the invitation for salvation was given, more than 100 souls responded and accepted Christ!

During the day, Timothy and his team visited homes in the villages, and the people welcomed them. Many prayed for salvation. In the evening they showed the Jesus Film, and several more souls came to faith in Christ.

Geoffrey was in his element accompanying the missionary team. After this experience, he joined Cornerstone as a pastor for the Rendille people. He later took Cornerstone teams to more villages and together planted 16 churches around Marsabit County. Five of these congregations have buildings, and eleven usually worship under trees.

FALLING INTO THE WAYS OF THE WORLD

Over the next six years, Geoffrey’s power in the community began working against him. Villagers offered him bribes for favors, and the temptation was too strong. Geoffrey became known as a corruptible leader among his people. He hobnobbed with politicians, who used him in their campaigns.

He was on a downward spiral. He finally left the ministry and went into goat grazing for a living. He spent his days drunk. All communication with Timothy, Cornerstone, and his churches was cut off.

Then God gave Geoffrey another opportunity.

On the other end of the line, after 12 years of silence, was Geoffrey.

“Please pray for me. I’m coming back to Christ.”

In October 2019, Timothy traveled to visit Geoffrey once again. He found Marian, Geoffrey’s wife, still there with him, faithful through all the years of waywardness.

Marian became a believer through the witness of her husband during his years of ministry, and she staunchly held onto her Christian faith — and her love for her husband — even as she saw him drift away.

Geoffrey and Marian welcomed Timothy into their home, and Geoffrey told Timothy how God delivered him from death. He had contracted tuberculosis and lost so much weight that he ended up in the hospital. Nine people, some of whom he knew personally, breathed their last in his hospital ward while he watched and waited for his own death. Deeply shaken and terrified, he pleaded with God, “I do not want to die. I want to live and work for you.”

One day a pastor came to the hospital to preach. Geoffrey recommitted his life to Jesus.

Now he is full of joy and ready to go and again proclaim the Good News of Jesus Christ.

Previous: Study: Ringing a cancer bell at end of treatment does more harm than good
Next: ‘Night on Earth’ leads ‘5 Family-Friendly Things’