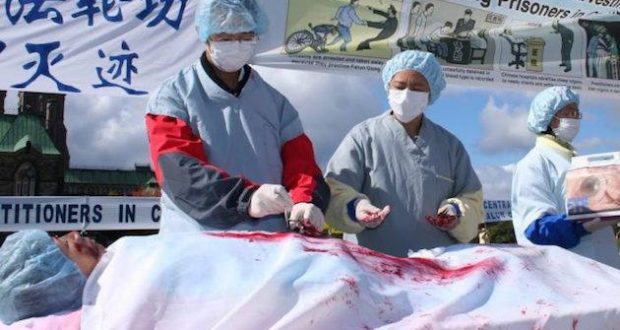 A reenactment of a Falun Gong practitioner being subjected to forced organ harvesting. (Minghui.tv)

Chinese prisoner killed by organ harvesting, daughter escapes to US

Ten police cars accompanied a small group of relatives to view Chinese prisoner Han Jun Qing’s body. No cameras or reporters were allowed on the premises.

But his daughter, Han Yu, needs no photograph or article to help her recount exactly what she saw that day.

In an interview with Han Yu, she said: “My father’s body was extremely thin. There were wounds on his face. There was tissue missing from under his left eye. His face was bruised green and purple.

“I saw a long knife incision, sewn together with black thread, starting at his throat, and going down until it reached his chest, where his clothes covered the rest. I tried to remove his shirt to see where the cut ended, but the police stopped me and forced me out.”

Only two people at a time were allowed to enter the room where Jun Qing’s body lay cold, supervised by two police officers, while uniformed officials surrounded the complex outside.

“Later, my aunt and uncle went in, and forced the buttons of his shirt open. They saw that the incision reached from his neck all the way down to his abdomen—a very obvious knife wound.

“They pressed down on his stomach, and found that the inside of his abdomen had no organs—it was full of ice. So his body took twice the time as normal to cremate compared to the average male body.”

At the time, the world did not yet know that the Chinese Communist Party was secretly practicing forced organ harvesting from prisoners of conscience—a practice that has continued unabated to the present day.

Her father returned from prison with stories of torture. He was often beaten by the guards. Once, he was simultaneously struck with ten electric batons.

Han Jun Qing passed away on May 4, 2004—three months after he was arrested for the second and final time.

Han Yu did not know of her father’s incarceration as she was no longer living at home. One day, she received a call.

“I was in shock. Panic. I could not accept reality.

“I could not believe that they had killed my father. I thought that the call was made by mistake. Not up until I saw his body, did I…”

Han Yu’s voice broke off abruptly, pausing for a heavy moment. “I could not believe it until I saw his body, and I saw that he was really gone. At the time, my mind snapped. I could not sleep, and when I did, I would have nightmares.

“I would dream of my father often.”

Following her father’s death, her stepmother was released from prison. But what she had experienced was enough to terrify her into never practicing her beliefs again.

A Journey West to Freedom

As a child, Han Yu practiced Falun Dafa with her parents. After her father’s death, she stopped.

“My father in the dream was quite different. He looked very healthy and alert, and he said he wanted to bring me to a place. I asked him where, and he said, just come with me.”

“He brought me in front of two elevators. One was going up, and the other going down. He was standing with me in front of the one going up. He was trying to tell me to find what I had lost, and then to stay true to my beliefs.”

Soon after her dream, Han Yu traveled to Hong Kong, where she was shocked to discover that there were still Falun Dafa practitioners out on the streets, speaking out against the evil which had persecuted them, and spreading the truth about communist propaganda.

She decided to take up her faith once more.

In 2015, Han Yu traveled to the United States to attend a gathering of Falun Gong practitioners from all over the world. Upon her return to China five days later, she was arrested along with her roommate and landlord, who were also practitioners.

She was interrogated in a police station about her brief stay in the United States, and chained to a metal chair with nothing to eat or drink for an entire day.

Police eventually released her as they did not have sufficient evidence that she was practicing Falun Gong.

However, Han Yu knew that it was time to leave.

Chinese workplaces now require employees to provide their social security numbers, and the phones of common citizens are being monitored.

“My first feeling upon coming here is—freedom. In China, I had to be extremely careful when reading a Falun Dafa book—I could never take it outside. Here I can read the book on the subway, do the exercises in parks, even practice in front of the Chinese embassy. I don’t have to worry about getting arrested or persecuted.

“But to be honest, there is still a part of me that hasn’t escaped China, as I still feel an irrational fear every time I see police.”

Now on every weekday, in rain or snow, Han Yu stands tall in front of the Chinese embassy, holding up banners and passing out flyers to countless strangers in her own effort to spread the truth about her beliefs and expose the evils perpetrated by the Chinese government.

She hopes to one day bring justice to the people responsible for her father’s death.

During the crackdown, Jiang Zemin had said the following: “Defame their reputation, bankrupt them financially, destroy them physically.”

He introduced genocidal policies to be performed by what is known as the “610 Office.” Examples of such policies include, “No measures are too excessive,” “No responsibility if beaten to death,” “Consider it suicide if beaten to death,” and “Cremate the body immediately without confirming the identity.”

Yet despite everything she had suffered at the hands of the Chinese police, Han Yu said: “I feel… actually, the police are quite pitiful. They really don’t know the truth. They think that what they believe in is right—because people are encouraged not to think independently in China.

“If they knew the kind of people we are, they wouldn’t persecute us like this.”

Han Yu remembers her father with pride as she takes up his mantle. “To the very end, he didn’t bow to persecution and held to his beliefs.

“I will also hold on to my beliefs, and spread the truth everywhere—to save more of the people living in China who are being persecuted for what they believe in. I still have friends in prison.”