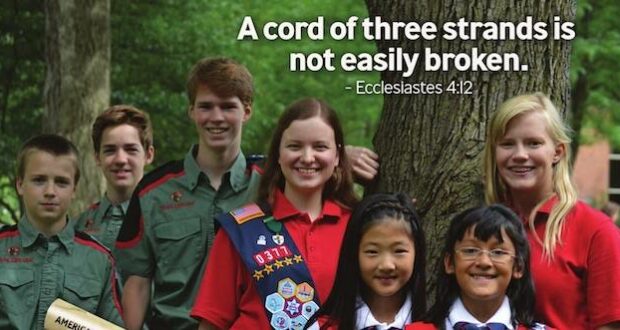 For years, the Boy Scouts have been mired in controversy that has caused numbers to plummet. Issues range from bankruptcy due to lawsuits to opening the Scouts to girls and allowing gay youth and adult leaders to participate. Those issues combined with the pandemic led to a membership drop from almost two million members in 2019 to around 762,000 this year.

A Boy Scout spokesperson told “The Hill” that “Like many youth-serving organizations, we saw an overall decline in membership in 2020. However, most Cub Scout packs and Scouts BSA troops that were registered at the beginning of 2020 have signed up for another year of scouting.”

This organization is described as a “Christ-centered, boy-focused, character leadership and adventure organization.” Instead of a Periodic Table of Elements, Trailmen complete what’s called a “Periodic Table of Advancements,” dozens of skills with the goal of becoming a Freedom Rangeman.

“The Boy Scouts kind of lost their way; they were an organization that has given us presidents and senators and astronauts and community and civic leaders,” Trail Life USA CEO Mark Hancock said. “They had a magic sauce; they had the magic for how to grow boys into good strong men. But they began to abandon those traditions through the changes that they made over the last couple years, and I think the families said, ‘No, we want an organization that understands that boys and girls are different.’”

Trail Life USA has seen 70 percent growth in the last year. And with more than 30,000 Trailmen across all 50 states, he’s not watering down the Christian emphasis.

“American Heritage Girls is Christ-centered, which differentiates us from other scouting organizations,” founder Patti Garibay said. “We were started in 1995 as a result of the changes in the Girl Scout program. I had been a Girl Scout volunteer for 13 years, ministering to girls along that program path. However, when they made a change in the Girl Scout promise to no longer mandate an oath to God, it was very concerning to me.”

After 26 years, troops now operate in all 50 states with girls also taking part in 15 other countries. Like Trail Life USA, American Heritage Girls is an unapologetically Christian organization.

Previous: During Sukkot (Feast of Tabernacle) you are to be “full of joy”
Next: Bill Maher calls out NFL for playing “black national anthem” before opening game