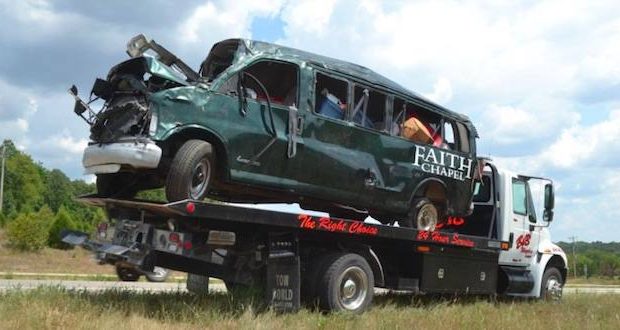 Three teenagers from the Kansas City area are dead and 10 other people are hurt after a church van heading for an outing crashed in southwestern Missouri.

The wreck happened around 10:40 a.m. Friday near Bolivar. Missouri State Highway Patrol Sgt. John Lueckenhoff says those killed were a 16-year-old boy from Olathe, a 14-year-old girl from Louisberg and a 17-year-old girl from Stillwell. Their names were not released.

All 10 of the injured were taken to hospitals in Bolivar and Springfield, about 30 miles south. Three are in serious condition.

The van was from Faith Chapel Assembly of God in Overland Park. Lueckenhoff says he doesn’t know specifically where the group was going.

The van ran off the roadway, overturned and struck a tree, Lueckenhoff said. The cause of the wreck is still being investigated.

“We cannot thank our physicians, employees, volunteers, emergency personnel, Polk County Sheriff’s Office, Bolivar Police Department and Missouri Highway Patrol enough for the dedication and compassion shown during this tragic day,” a post on the hospitals Facebook page said. “Our hearts are heavy for the victims, their congregations, families and friends.”

The hospital also thanked the community and church leaders for support shown to the victims.

“Many area pastors volunteered their time to provide spiritual and bereavement support,” the post said. “We were flooded with phone calls and texts from the community asking how they can assist the families involved.”

The Assemblies of God USA shared condolences for Faith Chapel on its Facebook page.

“Our hearts are broken to hear of a tragic accident this morning involving an AG youth group from Kansas,” the post said. “Join us in prayer for the families of those who lost their lives and for the students who are in need of healing.”
accident assemblies of god bolivar bus church deaths fatality kansas missouri van youth 2018-08-11
Dwight Widaman