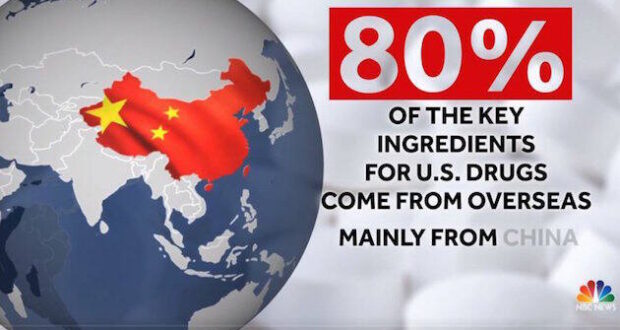 China this week implied it could hold the United States hostage over its control of drugs that millions of Americans depend on. The startling threat was met with anger by both Republicans and Democrat lawmakers.

In a special Senate hearing, the history of how U.S. manufacturers moved their supply chains and much of their manufacturing facilities to communist China. How China could easily cut off the flow of drugs was discussed at the Senate Committee on Small Business and Entrepreneurship.

READ: While threat of virus is real, hysteria is not helpful

“Thousands of our generic drugs and even some of the brand name products and perhaps even new therapies for coronavirus may depend on the chemicals that are sourced primarily in China,” Rosemary Gibson, a senior adviser to the Garrison, New York-based Hastings Center Bioethics Research Institute, told the committee.

China’s control of America’s drugs began when the communist nation was granted Most Favored Nation status under Bill Clinton and the law was signed by George Bush in December of 2001. At that time, the rush of American companies moving their drug manufacturing operations to China exploded.

The hearing’s focus was on “Coronavirus and America’s small business supply chain.”

Gibson continued, saying “if you are hospitalized with coronavirus, if you have a severe case, which thankfully are small numbers, you might need a ventilator. You will need sedatives like Fentanyl and Propofol.

“Your blood pressure may get dangerously low, so you will need pressers like Dopamine and Epinephrine. You might get a secondary infection that is bacterial in nature and you will need antibiotics. You might become septic, which is life-threatening.”

Gibson told the committee that she was recently “sitting in a room with the people that actually make medicines. These are the men and women in pharmaceutical engineering and pharmaceutical chemistry.

“I said, ‘So tell me, if you have to make these tomorrow, where do the core chemicals come from to make it? How much are we dependent on China?’ They said 90 percent of the chemicals to make those basic generic drugs depend on China.”

Here’s how China controls our drugs:

Earlier this month, after the U.S. restricted travel to and from China, Xinhua, China’s state-controlled official news agency, warned that, “these practices [restricting travel from China to the United States] in the United States are very unkind. They can be described as falling into the ground and killing people while they are ill.”

The Chinese news agency then added ominously that, “If China retaliates against the U.S. at this time, in addition to announcing a travel ban on the United States, it will also announce strategic control over medical products and ban exports to the United States.”

The situation is not totally hopeless, however, because, Gibson said, “the good news is there is advanced manufacturing technology and really brilliant chemists right here in the United States that want to make it capable of starting production tomorrow.”

In her prepared testimony, Gibson described the national security risks involved in U.S. dependence on Chinese drug production if Beijing follows through on the threat published by Xinhua.

“The unleashing of this threat will cause unprecedented deaths and social disorder on a scale never seen before on our country. The civilian and military health care systems will collapse. China can wreak other havoc. Medicines in the hands of an adversary can be weaponized,” Gibson testified.

“Medicines can be made with lethal contaminants or sold without any real medicine in them, rendering them ineffective. These products can be distributed to specific targets. Detection is time-consuming at best, and virtually impossible at worst.

“Dependence on China is a risk to the U.S. military, combat readiness, and force protection. The thousands of men and women on U.S. aircraft carriers in the South China Sea are dependent on the adversary for many of their essential medicines.

“Combat readiness and force protection are at risk with the military vulnerable to disruptions in supply and contaminated and toxic medicines. In 2018, more than 31,000 active duty military personnel, veterans, and their family members were notified they may have been given blood pressure medicines containing a cancer-causing ingredient.”

Another witness, Dr. Tim Morrison, a senior fellow at the Hudson Institute, said China’s “Made in China 2025” initiative signals Beijing’s long-term goal of moving from being a manufacturing power to producing higher-value products and services such as prescription drugs and related medical products.

“I think the point of Made in China 2025 is essentially to destroy the free market and create incentives to offshore production in China. And originally this seemed like a good thing. We’ll save prices. We’ll move value, or value you can move, we’ll continue to do the innovation, but China is scooping that up as well. And so, without any decision by any government authority this happened and now we are going to deal with the consequences.”

Hawley concluded his questioning by noting that “our current drug policy seems to privilege economic considerations of maybe a few companies over public health considerations.” Morrison said he agreed with Hawley’s characterization.