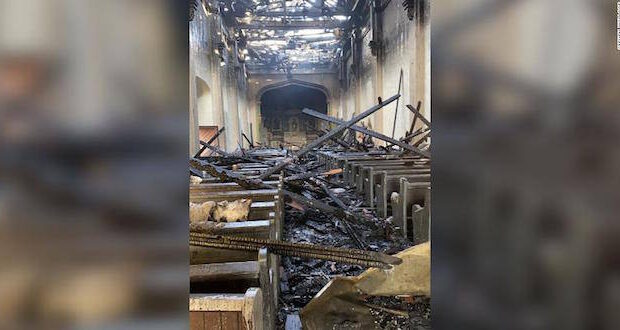 A Tennessee congressman on Wednesday urged the Justice Department (DOJ) to amp up their efforts to protect religious freedom and combat religious discrimination after dozens of churches have been attacked and burned during ongoing protests.

Rep. Chuck Fleischmann (R-Tenn.) raised concerns over the spate of attacks in a one-page letter addressed to Attorney General William Barr, describing the reports as a “disturbing trend.”

In his letter, Fleischmann highlighted the report where a statue of the Virgin Mary was beheaded at St. Stephen Catholic Church in July. Fleischmann, who is a Roman Catholic, condemned the incident at the time saying that the incident was a “disturbing attack on Catholicism and religion.”

“Sadly, it is among a series of attacks on Catholic churches that have happened in recent days. I hope that the perpetrators will be brought to justice, but I also pray that they will find their way to God as well,” he wrote in a statement.

Similar incidents were reported in dozens of places of worship across the country. Some of the incidents include destroying a pro-life memorial monument over on church property, ramming a minivan into a Florida church and setting it ablaze, vandalizing a statue of the Virgin Mary with the word “idol” outside a New York seminary, spray-painting profanity and protests slogans such as “BLM” on the walls of a New York cathedral, and the beheading of a statue of Jesus Christ in a Florida church. The biggest attack was on a California church which was destroyed. It was on the National Register of Historic Places.

We are so grateful and moved by the tremendous show of support from our Mission community during this tragic time. We thank the amazing efforts of our San Gabriel fire department and all the supporting cities that assisted in the fire. Their unwavering efforts to stop the fire saved our altar. Thank you to our Mission family that came to cry and pray alongside us yesterday…you have given us renewed and rekindled strength to rebuild and come back to celebrate our restoration. If anyone would like to donate, please visit our website, www.sangabrielmission.org and give to the Fire Restoration Fund. Peace.

A post shared by Mission San Gabriel Arcángel (@missionsangabriel) on Jul 12, 2020 at 9:14am PDT

“In times of uncertainty we naturally turn to religion for comfort and peace, something many Americans are seeking as we combat COVID-19, but these attacks add another level of distress for many across our nation,” Fleischmann said in his letter.

The spike in incidents has also been criticized by the U.S. Conference of Catholic Bishops. Last month, the organization issued a statement calling for “compassion and understanding” amid “an extraordinary hour of cultural conflict.”

“Whether those who committed these acts were troubled individuals crying out for help or agents of hate seeking to intimidate, the attacks are signs of a society in need of healing,” the group said.

Barr had previously raised concerns over what he says is a comprehensive effort to drive away religion and traditional moral systems in society and to push secularism in their place. In a speech to the University of Notre Dame’s law school, the attorney general underscored how secularists are using society’s institutions to systematically destroy religion and stifle opposing views.

Congressman Fleischmann is working with others in the House to join the effort to ensure safety for religious institutions during Black Lives Matter protests.