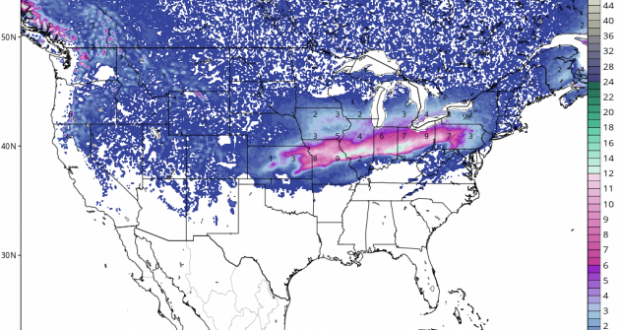 Local meteorologists aren’t wasting any time in warning of a major winter storm striking Kansas and Missouri this Friday into Saturday. The storm will have significant impact on the Chief’s Sunday game.

Gary Lezak, chief meteorologist for KSHB TV stated, “A Major Winter Storm is likely going to form Friday and track across the plains Friday night and Saturday into the Mississippi River Valley.  An Arctic air mass will blast south in the wake of this major winter storm.”

Lezak posted the graphic below on his weather blog: 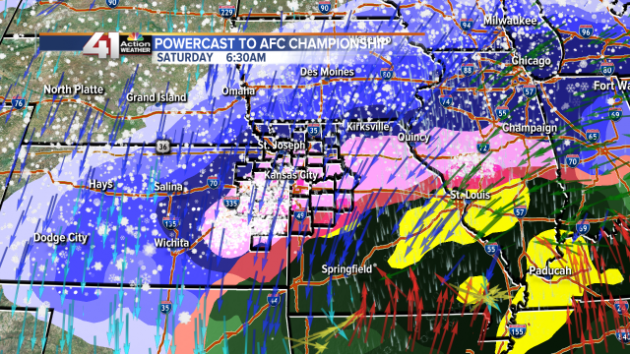 One computer model has Kansas City getting another 8 inches with higher amounts east along I-70 into St. Louis.

“If this is at all close to being correct,” Lezak says, if a Kansas City snowstorm did materialize, “KC would again be having a heavy snowfall and this time with some wind.”

Central and Eastern Missouri would again receive significant snow on top of the 12 to 20 inches they currently have on the ground.

With little melting happening this week, snow depth will increase dramatically adding to the frigid arctic temperatures this weekend. The temperature at kick-off Sunday is expected to be 3 degrees and dropping to 1 degree in the fourth quarter with wind chills at 20-25 below 0.

With wind chills in life-threatening range, there’s been some talk on social media if the game would proceed.

The National Weather Service agrees, stating in their forecast discussion, “The forecast remains generally unchanged, with growing confidence of accumulating snowfall and windy conditions for much of the area. Additionally, temperatures Saturday evening through Monday morning are anticipated to be dangerously cold.”

No announcements have been made as to how a Kansas City snowstorm will affect Sunday’s AFC Championship game. Decisions may come Saturday evening or Sunday morning as the severity of the storm’s impact on the field, players and fans is evident.

It wouldn’t be the first time a game was delayed.

On December 26, 2010, a Sunday Night Football game between the Minnesota Vikings and Philadelphia Eagles in Philadelphia was postponed to Tuesday, December 28, by a severe snowstorm. It was the first Tuesday NFL game in 64 years.

In 2014, a severe snowstorm that hit the Buffalo area forced a Jets–Bills game, originally scheduled for November 23, to be moved to Detroit’s indoor Ford Field on November 24.