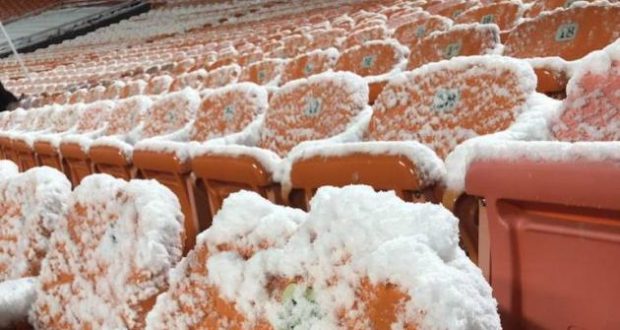 Will weekend bring another snowstorm?

After a snowstorm that local meteorologists seemingly missed, residents are asking “What’s the real deal with two systems sweeping by the region this week?”

The Friday and Saturday storm that left a widespread 9-10 inches of snow across Kansas City, 18 inches in Central Missouri and 12 inches in St. Louis was a surprise for most. Only a day or two before meteorologists were saying just 2-3 inches in Kansas City and 5-6 in Columbia, Missouri. That assessment didn’t go too well.

Kansas City received its largest snowstorm since February of 2014, though Kansas City International, in the far North of the metro, only received 4.4 inches. The KCI amount was less than the 5.8″ it measured on Nov. 25.

Jeff Allen, Kansas City Chiefs offensive guard, got caught up in the storm himself and was delayed getting to the playoff game.  A Good Samaritan helped pull his vehicle out of the snow after he got stuck on his way to Arrowhead Stadium.

Allen said he didn’t know the man’s name so Sunday took to social media to find out who it was. The two connected Sunday morning. Allen thanked the  man, who turned out to be homeless and living in his own car. Allen promised him tickets to this week’s AFC Championship game.

Allen may want to leave for the game a bit earlier this week with Arrowhead Stadium in the bullseye of another storm.

This year’s storms are tracking a bit further south than they are originally forecast.

What does that mean for the AFC Championship game this Saturday? It will be the first time ever that the game is played in Kansas City and weather may be a factor for fans–again.

The week will start out with possible sun on Monday, even if only briefly. But with a good snow cover, temps will struggle to make it into the mid-30s this week. Tuesday looks better for sun, but then on Wednesday a cold front pushes through Kansas and Missouri with low clouds returning.

Thursday the temps may make a run for 40 degrees and bring some calm before the next major storm flirts with the area and–the Championship game. Thursday will be pretty cloudy with highs mostly 30-35 and lows 25-30.

Friday begins with a chance of freezing rain and snow in the morning up to 1pm, then turning primarily to rain and some freezing rain in the afternoon. After the sun begins to set at 4 the rain should turn back to snow. Friday will likely see all snow after the sun sets with a low around 20. Chances for snow are 70 percent.
It will be a cold day for the Championship game with a high only near 21. Another good chance of snow and a strong winds will mean Chiefs fans will have to bear wind chill temps near 0.
Saturday night the temperature will plunge to just 3 degrees.
–Dwight Widaman and the National Weather Service
afc allen arrowhead forecast freezing game kansas kansas city missouri rain sleet snow snowstorm weekend winter 2019-01-14
Dwight Widaman