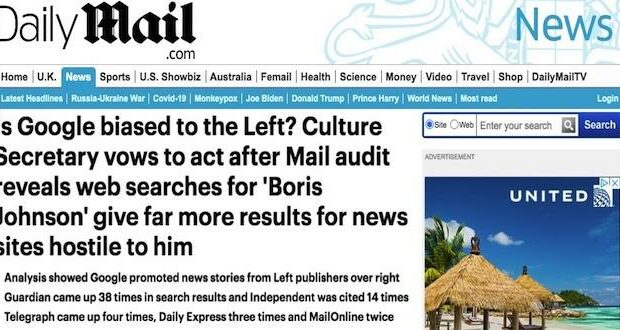 Google is throttling news not just in America but also in Britain, according to a whistleblower who admitted the data giant is purposefully dictating what news you see.  Searches are skewed and “reconfigured to what the establishment thinks” he’s said adding, “we have to use whatever democracy we have left to stop this.”

Critics have long complained that censorship of news exists at the corporate level of major search engines like Google, Yahoo and Bing.  And it is not just political views on the right, but also news from faith-based news outlets. Even free speech adherents on the left and in the Democrat Party have warned about the power of mega-corporations to control news distribution.

Now, some media outlets are fighting back with their own investigations of the search engine monkey business.

Britain’s Daily Mail investigated the issue and confirmed articles from mostly left-wing outlets were returned among the most searched terms on Google about UK Prime Minister Boris Johnson, prompting the country’s culture secretary to say that it “tells us what many have suspected all along.” 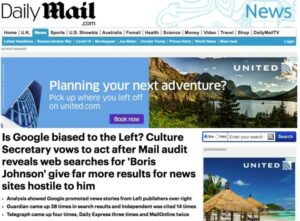 On June 10, the Daily Mail showed that searching for Johnson on Google presented far more results from news sites hostile to him. The Guardian came up 38 times, The Independent was cited 14 times, and BBC News came up 24 times. More conservative-leaning outlets such as The Daily Telegraph came up four times, the Daily Express three times, and MailOnline twice.

The response was noted by UK Culture Secretary Nadine Dorres, who is setting up the Digital Markets Unit (DMU) that will oversee a new regulatory regime, and who is currently looking at various platforms to understand how algorithms can impact users’ online experiences.

“I have raised the issue of bias and algorithms distorting democratic content and opinion with Google,” Dorres told the Daily Mail. “They have promised to revert to me with evidence that this is not the case which I have yet to receive.”

“This evidence published by the Mail is fairly conclusive and tells us what many have suspected all along. We are looking at how we can address unfair bias and distortion in the forthcoming Digital Competition Bill,” she told the publication.

The biased search results in Britain mirror studies that found even greater bias towards search results on the platform during the presidency of Donald Trump.

In 2019, Zach Vorhies blew the whistle on how Google specifically rewrote its news algorithms to target Trump, when Vorhies released hundreds of documents detailing the Internet giant’s anti-conservative bias.

Vorhies downloaded 950 pages of internal documents describing Google’s ongoing censorship regime and then delivered them to the Department of Justice. He also disclosed the documents to the public via the journalism nonprofit Project Veritas.

Vorhies told The Epoch Times that Google has created an “echo chamber” and that it rewrote its news algorithm to rank left-wing outlets higher.

Google uses what is called an “EAT” score, or “Expertise, Authoritative, and Trustworthiness.” This is used in the final page rank of every website based on the reputation of the website, topic, or person.

“The EAT score is generated about what the media outlets think about you. What does Wikipedia think? What does the MSM [mainstream media] think? Why it’s an echo chamber is because they rank which media is allowed to show up on their website,” he said, adding that the higher the score, the better the ranking.

A leaked document shows that The Wall Street Journal ranks at the top, followed by ABC, PBS, CBS, AP, and CNN at the top. 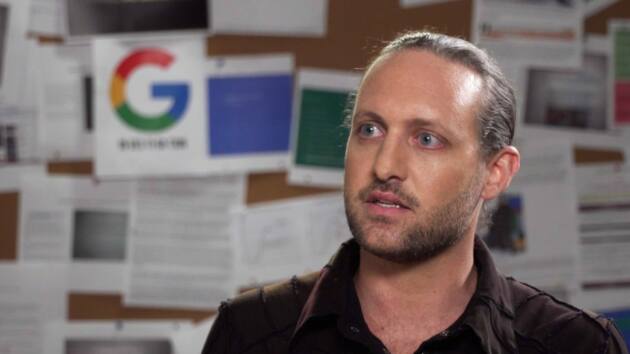 He said that his assumption was that Google has a “similar ranking for the British establishment,” which is causing some sites to go up and some down.

Vorhies said that Google has a “real censorship engine,” an AI-led system called Machine Learning Fairness that it uses along with various blacklists and secret page rank scores to control information.

“Machine Learning Fairness is now taking over this page rank score because Google started to transition so fast to the left that there was too much inertia in this human-based rating system. So what they have done is that they have transitioned to this AI system that can deboost and rerank. And they can do it in the course of a 24-hour news cycle,” he said.

Vorhies recommended looking for “escape hatches” where people can still access information, since many Silicon Valley companies have converted to the “hard left.”

Vorhies believes other companies could soon be forced to comply with “disinformation” regulations and have to sign up to network blacklists.

He’s referring to alternatives such as DuckDuckGo, Entireweb and Startpage, to name a few.

“If we don’t stop the left, we are going to have a media system that is going to be like those in communist countries, where everything is highly controlled and manipulated,” said Vorhies.

“That’s where we are headed,” he added.

He doubts the thoroughness of The Daily Mail’s study because of its small sample size.

Epstein has carried out extensive research on why he believes that Google “presents a serious threat to democracy and human autonomy.”

“The only way to really know what Google-and-the-Gang are showing people is by looking over the shoulders (with their permission) of a large and diverse number of real users. We’ve been doing rigorous analyses of this sort on a large scale repeatedly since 2016.”

For example, in 2016 he conducted a secret monitoring project that showed Google hid negative autocomplete search results for Hillary Clinton months before the election.

He says permanent, large-scale, monitoring systems are the only way to protect democracy.

In April, Epstein told EpochTV’s “American Thought Leaders” that his findings were “frightening” because of the tech companies’ ability to manipulate and change people’s behavior on a global scale.

He also estimated that Google’s search engine, with or without any deliberate planning by Google employees, was currently determining the outcomes of upwards of 25 percent of the world’s national elections.

A spokesperson for Google says, “The Daily Mail’s claims are completely inaccurate. Distorting results in the way they suggest would harm our business and is fundamentally not how Search works.”

Google pointed out that other studies by Stanford and the left-leaning The Economist have said there is no political bias in Search and News results.

–The Epoch Times and wire services

Previous: How corporate takeovers threaten podcasting
Next: People with bad diets know it, but those who think they eat well get it wrong