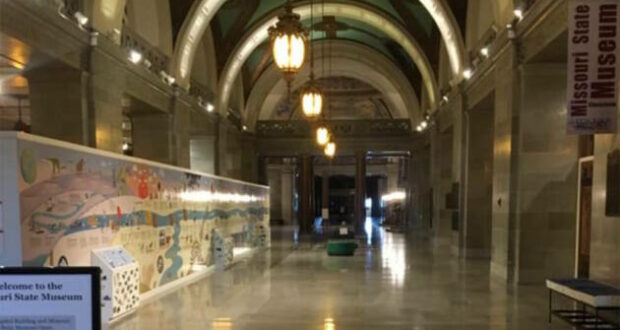 The war of words over a homosexual exhibit at the Missouri Capitol is heating up. Gov. Mike Parson said it was taken down after he received complaints and because it wasn’t approved for display by the board of public buildings. But just a few years ago, Democrats pushed for the removal of a historic statue representing the state in Washington D.C.

The exhibit in question, called “Making History: Kansas City and the Rise of Gay Rights,” documented the early days of homosexual activism in the state. It consisted of banners, curated by University of Missouri-Kansas City history students, recounting the activism of the city’s LGBTQ community.

Sen. Greg Razer (D-Kansas City), the only openly gay state senator, falsely claimed it was being moved into a closet. “After four days, I found out that it had been taken down and [the] traveling exhibit put back in a closet. I feel like I’ve been put back in a closet,” said Razer, who represents District 7 that includes parts of Jackson County.

The complaints put Democrats in an awkward position. In 2018, state Democrat leaders, including Congressman Emanuel Cleaver (D-MO), lobbied for the removal of Francis Preston Blair, Jr. Blair was instrumental in keeping Missouri out of the Confederacy but had previously inherited two slaves as a young man.

Democrats demanded his statue be removed from the nation’s capitol.

“Tragically, a controversy has arisen over which of the individuals honored by Missouri represents the greatest level of racism,” U.S. Representative Emanuel Cleaver quirked at the time. Cleaver supported removal of the statue which detailed an important part of Missouri history.

But that was then and the removal of history was roundly supported by media outlets like the Kansas City Star and top Democrats like Cleaver.

Today, Democrats have a different view on exhibiting Missouri’s history – the LGBTQ history. 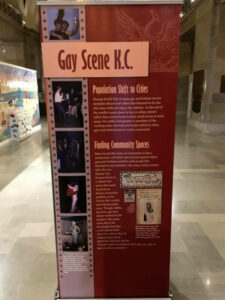 It was on display for four days before it was moved to another building. It’s scheduled to be on display until December 26. Parson’s administration announced that instead of the capitol, the exhibit would be put on display down the street in the historic Lohman Building.

Uriah Stark, a staffer for GOP state Rep. Mitch Boggs complained about the display on social media. “So is there any good reason that our taxpayer funded museum is pushing the LGBT agenda in our state capitol?” said Stark in a Facebook post.

“These are literally in-your-face banners that you can’t walk through the museum without seeing… and they’re scheduled to be there through December.”

House Minority Leader Crystal Quade, in a letter addressed to Dru Buntin, director of the Department of Natural Resources, said Parson’s explanation for why the display was removed was a lie. Quade, a Springfield Democrat, wrote that Buntin and Parson fabricated a reason for why the exhibit was removed.

“If you stick to your story that the LBGTQ exhibit had to come down because the board of public buildings didn’t approve it,” Quade wrote, “then to be consistent you must immediately remove all exhibits the board hasn’t approved. Since this is a function the board has never performed, that means stripping the Missouri State Museum bare.”

Quade urged Buntin and Parson instead to return the LGBTQ exhibit to the capitol. Neither DNR nor the governor’s office responded to a request for comment on Quade’s letter.

Parson told KMBC news in Kansas City that there is a process to determine what exhibits are placed in the state museum. Oftentimes, he said that other displays are placed on the first-floor rotunda in the center of the Capitol building.

Parson says the general counsel attorneys are looking at the situation.