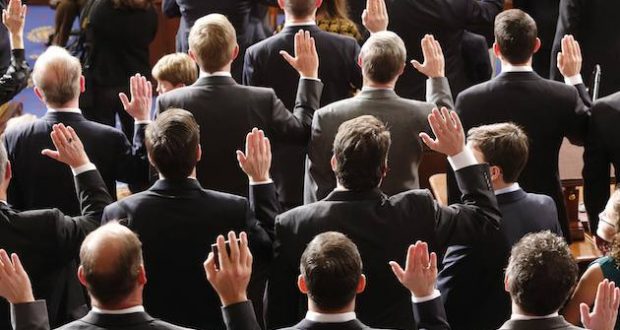 Democrats will keep ‘God’ in oath after protests

The Democrat-controlled House Natural Resources Committee will not remove “so help you God” from the oath taken, reversing course on a proposed rules draft that would have done so.

News outlets reported earlier this week on a draft of proposed rules for the Democrat-controlled committee that showed the phrase “so help you God” being deleted from the oath. However, on Wednesday both Democrat and Republican members of the House committee agreed to keep the phrase in the oath.

Democrat Representative Jefferson Van Drew of New Jersey, a member of the committee, said in a statement that it would be “hurtful and harmful” for the committee “to go out of our way to take it out.”

However, Democrat Representative Jared Huffman of California argued against the inclusion of God in the oath, saying that it violated the separation of church and state.

“All of these trappings of religion and God in these oaths certainly have not kept an awful lot of people from lying under oath,” stated Rep. Huffman, as reported by EWTN.

Headed by Democratic Congressman Raul Grijalva of Arizona, the Committee on Natural Resources seeks to help preserve the environment and defend the rights of indigenous populations.

When news broke about the proposed removal of God from the oath, many, including Representative Liz Cheney of Wisconsin, a Republican committee member, denounced it.

“They really have become the party of Karl Marx,” said Rep. Cheney to Fox News. “It is incredible, but not surprising, that the Democrats would try to remove God from committee proceedings in one of their first acts in the majority.”

In his “Washington Update” on Wednesday, Family Research President Tony Perkins referred to the oath controversy as proof that House Speaker Nancy Pelosi and other elected Democrats have a “God problem.”

“In a nation whose motto is ‘In God We Trust,’ it is a sad commentary on the mindset of House Democratic leadership that removing God would even be considered,” stated Perkins.

“Although the House committee has reversed course, I believe it’s important that Speaker Pelosi be put on notice that as Americans, we want and need the presence of God in our government.”

Many federal oaths reference God. However, the oath of office for the president of the United States does not include the phrase; instead, figures taking the oath have added it by tradition.

Previous: ANTIFA leader arrested for assault of marines, terrorism
Next: Topeka Metro & ATU #1360 partner with Dillon’s to ‘Stuff the Bus’ for Project Topeka