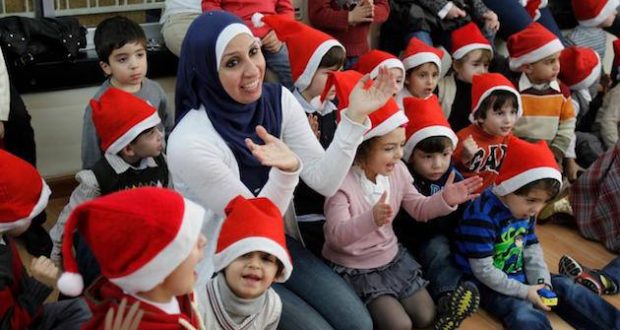 Do atheists attend church on Christmas?

The country seems more and more divided between people of faith and those who consider themselves agnostics and atheists.

Many people who are nominally religious and even agnostic may still celebrate the holidays, joining in the cultural traditions of Christmas of which the true meaning may now be lost on them.

But what about those who consider themselves atheists? How do those who do not believe in God deal with a holiday that seemingly takes over every corner and aspect of culture at this time of year?

Overall, married adults, people with children under 17 and individuals who are older than 30 are more likely to celebrate Christmas than their counterparts, though the differences in percentages are minimal.

“There’s a reason that Christmas themes dominate television, stores and neighborhoods come the end of November,” said Scott McConnell, director of LifeWay Research. “Nearly every American celebrates the holiday in some form or fashion.”

Once it was determined who is celebrating Christmas, the survey turned to how Americans are celebrating. LifeWay Research uncovered a gap, even among Christians, between the religious emphasis of the holiday and the merry, family-focused traditions.

In fact, 81 percent put family first at Christmas, agreeing, strongly or somewhat, with the statement, “Family traditions are the most important part of Christmas to me.”

“There is no question that Americans celebrate the Christmas holiday, although many institutions shy away from using the words ‘Merry Christmas’ so as to not offend the 9 percent who do not,” said Ed Stetzer, president of LifeWay Research. “But a closer look at how they celebrate reveals that it typically revolves around family and that Christ-centered elements are not as common. For many in our culture, the season is disconnected from the reason. For many of those, family is the reason for the season.”

Among a list of 14 things people do at Christmas, giving gifts to family members is the most common activity at 89 percent. Additionally, more than three out of four households report they gather with family or friends for a Christmas meal (86 percent), put up a Christmas tree (80 percent), listen to Christmas music (79 percent), and decorate their homes (77 percent).

Christians are actually among the most likely to enjoy elements of the Christmas season not related to Jesus’ birth, with 66 percent saying they watch fictional Christmas movies, as compared to half of agnostics or those with no preference, and less than half of atheists and Americans of other religions.

“That’s good news, but it is not the whole story,” Stetzer said, pointing out that 38 percent encourage belief in Santa Claus yet only 28 percent read or tell the Christmas story from the Bible.

“Acknowledging the source of Christmas is widespread, but telling the story is not. Christians should do both and share that with others,” Stetzer explained.

Though a majority encourage belief in Christ at Christmastime, 67 percent of Americans say that, “Many of the things I enjoy during the Christmas season have nothing to do with the birth of Jesus Christ.”

“Americans give Jesus a head nod at Christmas but spend most of the season pleasing their eyes, ears and taste buds with decorations, music and meals,” McConnell said. “Many celebrate Christmas the way most have celebrated Halloween – the fun traditions without sharing the religious significance.”

Still, nearly half of all households do attend special church services on Christmas Eve or Christmas, including 2 percent of atheists, 9 percent of agnostics or those with no religious preference, and 22 percent of those claiming other religions.

“Churches often look forward to some of their largest attendance of the year at Christmas week services, and 47 percent of Americans say their household typically attends such church services,” Stetzer pointed out. “It may not be a huge percentage, but the survey suggests that Christmas does provide an opportunity for churches to reach typically unchurched individuals.

“Christians can often get distracted during Christmas and completely overlook the opportunity to represent Christ to their neighbors,” Stetzer continued. “Believers can and should put Christ first in our Christmas celebrations and then represent Him to a world in need of the biblical understanding of ‘peace on earth.’

Previous: Tofu for Christmas?!
Next: NASA’s Christmas message in 1968