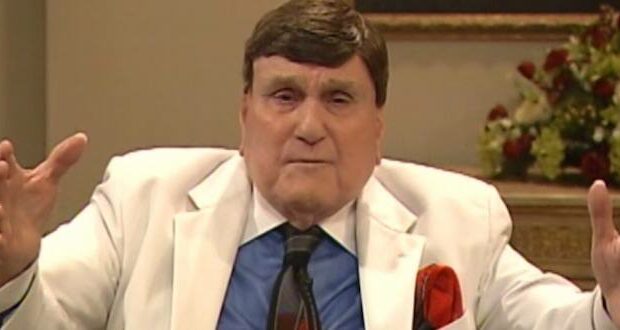 One of the early pioneers of televangelism has died. The Rev. Ernest Angley passed away last week.

“Pastor, evangelist and author Rev. Ernest Angley has gone to heaven to be with His lord and master at 99,” according to statement on the website of Ernest Angley Ministries. “He touched multitudes of souls worldwide with the pure word of God confirmed with signs, wonders, miracles and healings. He truly pleased God in all things.”

The televangelist led Grace Cathedral church in Cuyahoga Falls, Ohio, in the Cleveland-Akron area for several decades. At age 20, he attended the Church of God Bible Training School in Tennessee and met his wife, Esther Lee, known as Angel. She was 49 years old when she passed away in 1970.

The couple appeared together in tent revivals, auditoriums and churches throughout the South before moving the ministry to Springfield Township, southeast of Akron, in 1954.Within a few years, the church had matured from a pop-up tent in a parking lot to a $1 million building that drew thousands of followers a week.

Angley also aired his services on radio until he bought WBNX-55, which has been in operation since 1985. Author Stephen Pullum told Cleveland.com that “Angley offered hope to the hopeless.”

But he also drew controversy when he was arrested in Germany in 1984 over charges practicing medicine without a license when he preached that those with AIDS could be cured by prayer. And he was also criticized by officials in Guyana in 2006 for allegedly claiming that he could cure AIDS. And while his ministry brought in millions, with Angley even buying his own 747 for mission trips, he was one of the few TV preachers in the 80s and 90s who never faced a finanical scandal.

As Angley approached 90 years of age, he was the subject of a sexual harassment lawsuit which settled out of court in 2018.

Angley’s unusual mannerisms and speaking voice, along with his famous toupee, made him an target for comedians who loved to mock him. Actor and comedian Robin Williams mocked Angley with a character named “Rev. Earnest Angry.” The actor, who killed himself in 2014,  also spoofed the preacher on “Saturday Night Live” and numerous othe appearances.

While the preacher did not lack for critics, he also had hundreds of thousands who credit their faith to his half-century of ministry.