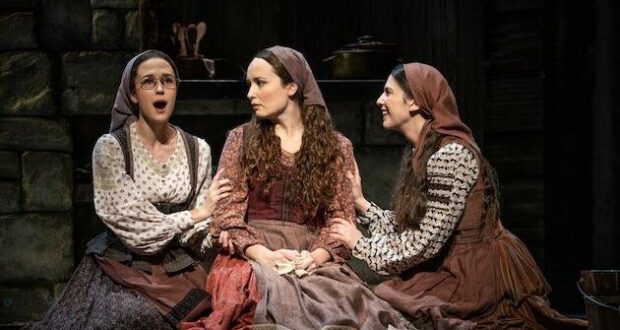 ‘Fiddler on the Roof’ mirrors a world of family, love, and Russian aggression

“Fiddler on the Roof” comes to Kansas City Tuesday, May 3, through Sunday, May 8 after the pandemic interrupted its national tour which began in 2018.

The musical that was first performed in 1964 addressed ageless themes of relationships between fathers and daughters, the bond between a husband and wife, and the universal joys and challenges of families. Traditions are important because it binds family together throughout the ages!

I attended a wedding this weekend and the traditions such as the exchange of rings and groom/mother dance were included. The surprise tradition was the “mixing of the dirt” – not sand – to symbolize the joining of twp people into one family! The alteration of this tradition was meaningful in that both the bride and groom came from Missouri Century Farms (farms held in the same family for more than 100 years) and continue to earn their livings from agribusiness.

Tevye, the Father, in this musical is dealing with a much more serious breaking of traditions. He’s a poor Jewish milkman with five daughters in 1905 Russia. Yente, the local matchmaker, announces to his wife Golde, that the older Lazar Wolf, a wealthy butcher wishes to marry the oldest daughter Tzeitel.  Unknown to Tevye, Tzeitel and her childhood friend, Motel, have secretly pledged to marry. A momentous breaking of tradition for Tevye.

Tevye’s world is again in mayhem when his second daughter falls in love with Perchik, an educated radical, who Tevye has allowed to live in his home in exchange for tutoring his daughters. Tevye can bend tradition for his first two daughters, but when his third daughter wants to marry a Gentile, can Tevye bend that far?

Tevye has other trouble having been warned by the local friendly Constable that there is going to be a “little unofficial demonstration” or pogrom in his Jewish community. Pograms have been common in Europe and around the world as governments officially sanctioned the taking of Jewish farms and businesses and even expelling whole Jewish communities. Countless Jews died in these events over the last 2,000 years. And so, yet another pogram is about to take place in Russia. The Constable arrives to tell him that the villagers have just three days to leave the town.

How can you be a stranger in a strange new place? How far do you bend when it comes to faith? Does Goldie love him after 25 years of an arranged marriage?

The original production of “Fiddler on the Roof” won nine Tony Awards, including best musical, score, book, direction and choreography. The musical held the record for the longest-running Broadway musical for almost 10 years. “Fiddler on the Roof” produced five Broadway revivals, was adapted into a highly successful 1971 film, and is a popular choice for school and community productions.

Bartlett Sher and the team bring a freshness to this theatrical masterpiece. Creative movement and dance are choreographed by Israeli Hofesh Shechter reflecting the original staging by Jerome Robbins. Who could ever forget the wedding “bottle dance?”

“Fiddler on the Roof” is a musical that centers around complicated family relations that take place during 1905 when the world was in upheaval and transition. When introducing the musical to this generation, the musical mirrors today’s headlines as Russia forces millions to flee their homes of generations.