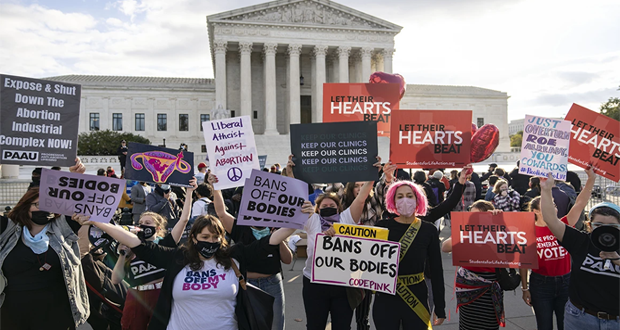 A majority of the Supreme Court is set to overturn the right to abortion established in the Roe v. Wade decision of 1973, according to an initial draft majority opinion obtained by Politico and leaked Monday.

The draft is written by Justice Samuel Alito and was reportedly circulated inside the court.

“We hold that Roe and Casey must be overruled,” Alito wrote. Casey was a separate decision that defended abortion rights.

“Roe was egregiously wrong from the start. Its reasoning was exceptionally weak, and the decision has had damaging consequences. And far from bringing about a national settlement of the abortion issue, Roe and Casey have enflamed debate and deepened division,” he continued.

“It is time to heed the Constitution and return the issue of abortion to the people’s elected representatives,” he concluded.

For many years, most thought Roe would never be overturned, but recent changes to the makeup of the Supreme Court seemed to have brought it back to the realm of possibility.

Alito’s conclusion was thought to be a possibility in December when the court considered a Mississippi pro-life law that would ban abortions after 15 weeks.

Such a prohibition on abortion that early in a pregnancy seems forbidden by the court’s decision in Roe, and a subsequent decision that said states could not place an undue burden on the right to abortion before fetal viability, which is usually seen as 22 to 24 weeks.

The draft leak obtained by Politico was written in February. It is not yet clear if it has been rewritten or revised. Until an official opinion is signed and released by the Court, Roe v. Wade will remain law.

It was reported that justices Stephen Breyer, Sonia Sotomayor and Elena Kagan – are working on one or more dissents. It is unknown how Chief Justice John Roberts will vote.

Disclosing a draft opinion in a Supreme Court case is an extremely rare occurrence. Draft opinions can circulate and change, as can votes.

If Roe v. Wade is overturned, abortions rights would be left for the states to decide.