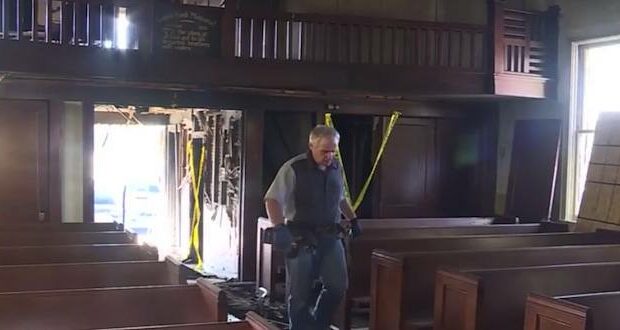 Fire at historic Kansas City church being investigated as arson

Federal authorities are investigating a fire at historic Harlem Baptist Church in Kansas City as arson. The fire last Saturday gutted the front of the church and left half of its eight stained glass windows shattered.

The U.S. Bureau of Alcohol, Tobacco, Firearms and Explosives is investigating the blaze as a “set fire,” and accelerant dogs were used, said John Ham, an ATF spokesman. But investigators don’t believe it was a hate crime. “There’s absolutely no indication to us at all that the fire has anything to do with the congregation,” he said. 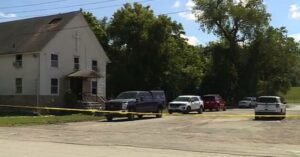 The fire could have been set by a homeless person from a nearby encampment. The front door of the church was open when firefighters arrived, Ham said, and it appears the fire may have been set in a stairway leading to the basement.

Once, Harlem was a thriving town. It was founded in 1822 north of the Missouri River, where steamboats landed and ferries carried passengers across the river to a place that later became Kansas City, but it wasn’t incorporated for another three decades. The ferryboats became extinct when the Hannibal Bridge was opened in 1869, and major floods in 1844, 1903, 195, and 1993 scared many residents away.

The first settlers to Harlem were Germans who came over from the Netherlands. They named the town after a city in the Netherlands, the same as the Harlem neighborhood in New York City. Now a sign marks the spot, just east of the Charles B. Wheeler Downtown Airport, but the onetime population of hundreds of residents, as well as their homes, grocery stores, schools and other pieces of the town, are long gone.

Arson fires have continued into 2021 after dozens of churches and synagogs were torched in 2020 during BLM and Antifa riots across the country.