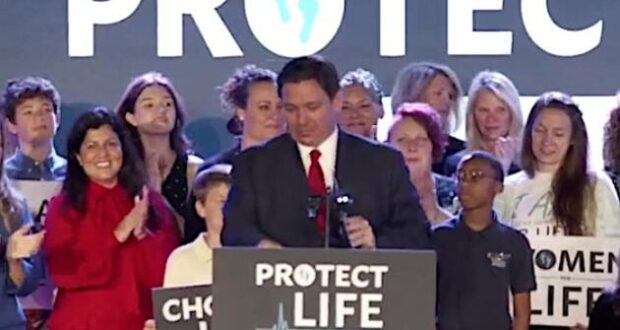 The state of Florida is being sued by a Jewish synagogue over a new pro-life law that outlaws abortion after 15 weeks of pregnancy.

Congregation L’Dor Va-Dor of Boynton Beach alleges that the law conflicts with a tenet of the Jewish faith that permits abortion “if necessary to protect the health, mental or physical well-being of the woman.”  The synagogue claims that the law would punish its congregants who receive an abortion.

Calling it unconstitutionally vague, the lawsuit alleges that the law “prohibits Jewish women from practicing their faith free of government intrusion and this violates their privacy rights and religious freedom.”  Other liberal organizations, including the ACLU, have also filed lawsuits.

The law will go into effect July 1, and it contains multiple exceptions, according to a report. It has an exemption for cases in which the pregnancy seriously threatens the life of the mother, which must be confirmed by a second doctor in writing, or if a fatal fetal abnormality is detected.

The plaintiffs also claimed that the law would harm the Jewish people by forcing them to practice the teachings of other religions. It also would force some of its pregnant women to travel to a different state to seek an abortion, a delay that could “increase the danger and harm to women from abortion, which nevertheless is less than the dangers of childbirth,” the synagogue claims.

The administration of Gov. Ron DeSantis, which is named a defendant in the case alongside state attorneys Jack Campbell and David Aronberg, attorney general Ashley Moody, the Florida Department of Health and other state health agencies, doubled down on the validity of the measure when asked for comment.

During the signing ceremony, DeSantis took the opportunity to hit those in Hollywood and in the media for their support of abortion.

“They are taking the position that babies can be aborted up to the ninth month,” he said. “What they would say is, ‘parent holding that child, if you just go back a day or two, then you would have been able to snuff the child out entirely.'”

“That is just fundamentally wrong, that is infanticide, and that has no place.”

“Our office is confident that this law will ultimately withstand all legal challenges,” a DeSantis spokesman said.

The synagogue’s lawsuit comes after the surprise leak of a draft Supreme Court majority opinion that appears to project the reversal of Roe v. Wade, in the absence of which federal mandate would send the abortion issue to the state legislatures to regulate.