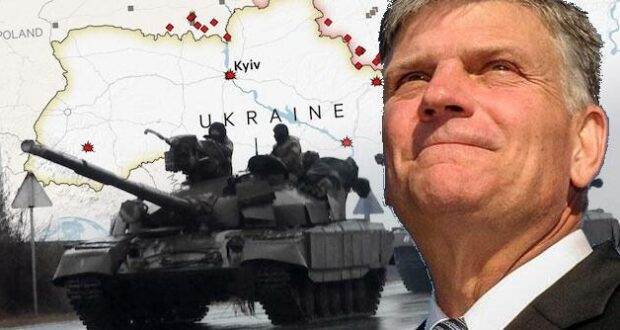 The war in Ukraine drags on, even as Easter week quickly approaches. Last week, Franklin Graham wrote Russian President Vladimir Putin and Ukrainian President Volodymyr Zelenskyy, requesting a ceasefire from the war during Holy Week of the Western and Eastern churches.

He said he isn’t confident he will hear back from Putin but believes the attempt is necessary. Graham recently returned from a visit to Ukraine, where Samaritan’s Purse has set up two field hospitals and three medical clinics. One of the field hospitals is situated just outside Lviv in western Ukraine. The ministry is operating a 24-hour clinic at a Lviv train station.

“We’re consuming quite a bit of supplies,” Graham told Moody Radio. “The most important thing we can do is pray. Pray for the churches and pray for the people there and just pray that God would somehow intervene and bring this to an end.”

Churches, he said, have turned into distribution centers where refugees can find food, clothes and blankets. “That’s what the church should be, and that’s what they’re doing,” he said.

Samaritan’s Purse has committed $16 million to the region’s churches.

“That’s just direct cash that we put in their bank account,” Graham said, “so that not only do we send them supplies, but they also have money, where they can actually get that money to a family that’s in desperate need.”

It is not believed that Ukraine will take Graham up on his suggestion. The Russian army is currently said to be in retreat and Ukrainian forces are pushing to free hundreds of towns and cities from Russian occupation. As they do, hundreds of bodies of women, children and the elderly are being discovered and presumed murdered by Russian troops. The county could be thousands, according to UN officials. A ceasefire, while it would give some a respite from hostilities, would also cause countless others to die as Russia engages in a scorched earth policy.

Russia has not adhered to previous ceasefires during the 6-week conflict.