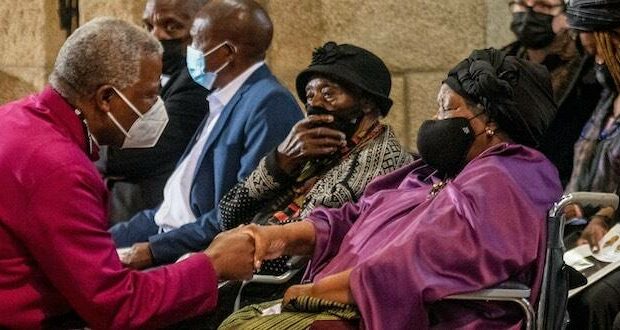 A funeral service was held in Cape Town, South Africa, over the weekend for Archbishop Desmond Tutu, the Nobel Peace Prize-winning peace activist who helped end apartheid but also fought against the violent extremism of the African National Congress

“When we were in the dark, he brought light,” Archbishop of Canterbury Justin Welby, the head of the worldwide Anglican church, said in a video message shown at a requiem mass celebrated in Tutu’s honor Saturday at St. George’s Cathedral.

“For me to praise him is like a mouse giving tribute to an elephant,” Welby said. “South Africa has given us extraordinary examples of towering leaders of the rainbow nation with President Nelson Mandela and Archbishop Tutu … Many Nobel winners’ lights have grown dimmer over time, but Archbishop Tutu’s has grown brighter.”

Tutu had requested a plain pine coffin, the cheapest available, which fit perfectly with his humble attitude. The service featured African choirs.

South African President Cyril Ramaphosa delivered the main eulogy in which he called Tutu a “global icon” and someone of “great moral stature” who was “of service to humanity.”

“Our departed father was a crusader in the struggle for freedom, for justice, for equality and for peace, not just in South Africa, the country of his birth, but around the world as well,” the South African president said.

“[He was] a humble and brave human being who spoke for the oppressed, the downtrodden and the suffering of the world,” Ramphosa said.

Tutu died December 26. He had been hospitalized several times since 2015 after being diagnosed with prostate cancer in 1997, CBN News reported.

“His legacy is moral strength, moral courage and clarity,” Anglican Archbishop of Cape Town Thabo Makgoba said in a video statement. “He felt with the people. In public and alone, he cried because he felt people’s pain. And he laughed — no, not just laughed, he cackled with delight–  when he shared their joy.”

Throughout the 1980s, when South Africa was gripped by anti-apartheid violence and a state of emergency giving police and the military sweeping powers, Tutu was one of the most prominent black leaders to speak out against abuses. The Nobel Peace Prize in 1984 highlighted his stature as one of the world’s most effective champions for human rights, a responsibility he took seriously for the rest of his life even as he criticized Nelson Mandela and also the African National Congress which called for retribution against whites.

Tutu was born Oct. 7, 1931, in Klerksdorp, west of Johannesburg, and became a teacher before entering St. Peter’s Theological College in Rosetenville in 1958 for training as a priest. He was ordained in 1961 and six years later became chaplain at the University of Fort Hare.

Moves to the tiny southern African kingdom of Lesotho and to Britain followed, with Tutu returning home in 1975. He became bishop of Lesotho, chairman of the South African Council of Churches and, in 1985 the first black Anglican bishop of Johannesburg and then in 1986, the first black archbishop of Cape Town.

Tutu was arrested in 1980 for taking part in a protest and later had his passport confiscated for the first time. He got it back for trips to the United States and Europe, where he held talks with the U.N. secretary-general, the pope and other church leaders.

Asked once how he wanted to be remembered, he told The Associated Press: “He loved. He laughed. He cried. He was forgiven. He forgave. Greatly privileged.”

Previous: The Renewal event will call America back to its covenant with God
Next: Christian music fans mourn death of Jay Weaver of Big Daddy Weave