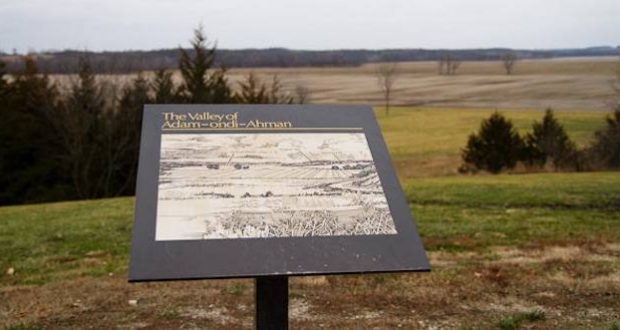 Mormons believe this is where Adam and Eve were banished.

‘Garden of Eden’ just north of Kansas City, according to Mormon tradition

Different religions have their own sacred  spaces. Though most Mormons may not even know it, one of theirs is just a short drive north of Kansas City. It’s the “Garden of Eden.”

Adam-ondi-Ahman, a mysterious plot of land 70 miles north of Kansas City in Daviess County, is owned and maintained as a sacred site by the Church of Jesus Christ of Latter-day Saints, according to a story from Religion News Service. Adam-ondi-Ahman (adam-on-die-AH-min) is a part of the faith that most Mormons don’t encounter in their everyday lives or incorporate into their regular worship.

Mormons believe that in June 1838, Joseph Smith received a revelation from God that this Mormon farming settlement of between 500 and 1,000 was to be called Adam-ondi-Ahman — a translation from “the original language spoken by Adam,” according to the church, that means “Valley of God, where Adam dwelt.”

Church doctrine refers to the place as the site where Adam and Eve went after God banished them from the Garden of Eden. It’s also regarded as a gathering place for faithful Mormons at the Second Coming of Jesus Christ.

Author Brook Wilensky-Lanford said Smith’s prophecy was best understood in the context of history. Mormons had repeatedly been pushed out of their settlements and longed for a gathering place. “The Garden of Eden sounded to Smith like a perfect refuge,” said Wilensky-Lanford, who wrote ‘Paradise Lust: Searching for the Garden of Eden.’ It was about finding the perfect place and about exile from that place.”

The site’s plaques mention Adam and Eve, only to say that Smith named the place after Adam. The church leaves it up to Mormons to teach their own children that it is in this valley that a future gathering of Adam and his righteous descendants will meet with Jesus Christ during the last days.