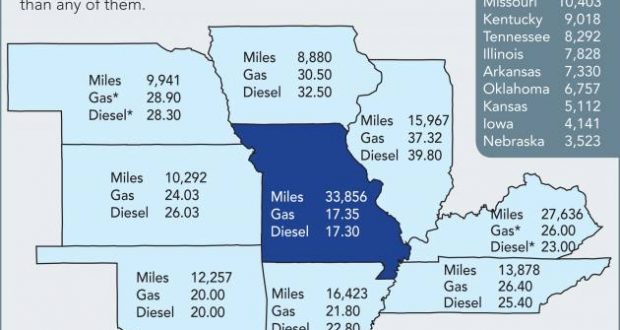 Missouri lawmakers are in a race to fix the state’s roads before its too late. An effort to hike Missouri’s gas tax by 10 cents over four years to help fix roads and bridges has made its way to the state House Transportation Committee.

Missouri’s 17 cent gas tax has not increased since 1996 and is one of the lowest in the nation. Elected officials have disagreed for years about ways to boost highway funding. Voters are seen as wrongly defeating a measure in November.

Rep. Steve Butz, D-St. Louis, wants to boost the fee by 10 cents over four years. Under House Bill 822, alternative fuels would also be taxed at a similar rate beginning in 2026. The rate would be decided by the Missouri Department of Agriculture.

During a public hearing Thursday, Samantha Davis with the Missouri Corn Growers Association says the organization supports the legislation but hopes changes are made to the measure.

“Ethanol and biodiesel are blended with traditional fuel, so we are considered gasoline,” she says. “We are taxed at that similar rate. However, as blending rates may or may not increase, we would be interested in some cases being considered an alternative fuel because it does burn differently.”

Ron Leone with the Missouri Petroleum Marketers and Convenience Store Association says lawmakers should boost the fee to the level allowed under a 1980 Constitutional change, often referred to as the Hancock Amendment.

“I think it’s one of the primary responsibilities of government is transportation,” Leon says.

No one spoke in opposition to the legislation.

Some supporters of raising the gas tax like to refer to it as a user fee because those who use gasoline are taxed. Those who don’t use fuel are not taxed. An argument made during similar measures has also been about motorists from out of state accounting for about half of the money generated from gasoline tax revenue.

In the November 2018 election, Proposition D overwhelmingly failed at the polls. The measure would have increased the state’s fuel tax by 10 cents over a four-year period to help pay for Missouri’s infrastructure system and State Patrol enforcement efforts. It also asked voters if Olympic medals should be tax exempt for Missourians who win them.

Arguments heard about the measure’s failure deal with ballot language being confusing for some voters and not putting all the funding toward road and bridge improvements.

Missouri has 922 bridges listed in poor condition. Gov. Mike Parson’s state budget plan for the next fiscal year includes borrowing $350 million dollars to fix 250 Missouri bridges. The money would be borrowed over 15 years – racking up an estimated $100 million in interest.

On Wednesday, Rep. Cody Smith, the House Budget Committee chairman, said he hopes to apply $100 million in the state budget for the fiscal year beginning in July to put toward road and bridge improvements.

Previous: ‘Prophecy fulfilled” as tech leaders in Israel for global summit
Next: Kansas Museum of History presents stories of history from each of 105 Kansas Counties