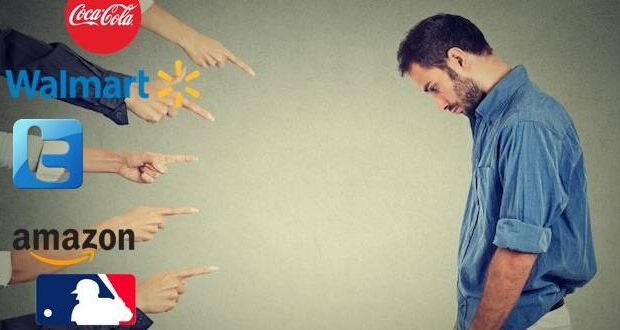 Group forms to push back against woke agenda of corporate America

After corporate America was again criticized for weighing in on political issues, many Americans have had enough. Stop Corporate Tyranny, a coalition concerned with the increasing dictates of  ‘woke’ capital and cancel culture, has launched a new website dedicated to exposing what they see as the threat of “corporate tyranny.” They’re sending a message to the country’s ruling business class: just sell your products or get out of business.

They’re is starting with the leading social media platforms which have banned speech or users they disagree with.

“There are plenty of examples of conservatives being de-platformed, silenced, censored, and we want to stand up against that,” Patrice Onwuka, of the Independent Women’s Forum stated.

The group describes itself as a “one-stop shop” for educational resources exposing the Left’s nearly completed takeover of corporate America.” It says it is providing resources and tools for everyday Americans to “fight back against the Left’s woke and censoring mob in the corporate lane.”

The group says the left has weaponized corporate America against traditional beliefs and values. “We work to dissuade corporations from engaging in activities that undermine free enterprise, individual liberty, limited government, free speech and the rule of law. Companies must instead return to their primary role—as fiduciaries for their investors. We seek to restore a healthy understanding of, and respect for, liberty, free enterprise and American culture all of which is being corrupted by corporate oligarchs,” it states.

Quincey was likely referring to publicly supporting H.R. 1, the controversial election bill stalled in Congress, CNN reported in a story about corporations criticizing the Georgia law.

“We’ve come to the point,” says Justin Danhof of the National Center for Public Policy Research, “where corporate America is the mouthpiece for the political Left.”

Danhof often recounts to One News Now his participation at annual shareholder meetings, where the public format allows a powerful executive to be confronted about left-wing policies without hiding behind press releases and friendly media. The shareholders who witness those confrontations, Danhof has said, are often in the dark about the leftward ideology until it is brought to light for everyone to see.

“The Left has been extremely effective in pressuring corporate America to basically take up their agenda,” Saul Anuzis, who leads the 60 Plus Association, tells One News Now. “And conservatives for all practical purposes have been very quiet and sitting on the sideline.”

Jerry Bowyer, who leads Bowyer Research, tells One News Now that half the country does not share the views that are driving the agenda at major corporations.

“You corporations really need to pay attention to us because we’re customers and in many cases we’re your owners and shareholders,” he says. “And your responsibility as business managers is to focus on running your business, not to ride your own political or ideologically hobby horses.”

America’s major corporations have traditionally been portrayed by the Left and by the Democratic Party as greedy, selfish companies that are in bed with equally greedy Republicans, but those corporations have now hitched themselves to groups such as the Black Lives Matter organization, which was founded by self-described Marxists.

At least Eighteen corporations including Amazon, Airbnb, and Nabisco wrote checks for as much as $500,000 to the Black Lives Matter Foundation, where more than 80 percent of the donations went to paychecks, consulting fees, and air travel. The group raised a total of $90 million in 2020 with even some supporters asking where all the money went.

Before the CEO of Coca-Cola claimed Georgia lawmakers are voter-blocking racists, the corporation made headlines in recent weeks for rolling out an anti-racism campaign with the slogan “Be Less White” for its own employees.

“Corporations are terrified by the violence that Black Lives Matter has brought to cities all over the country,” Washington Times columnist Robert Knight told OneNewsNow last year, “and they’re rushing to comply with whatever the race hustlers tell them to do.”

According to last week’s CNN story, in fact, the CEO of Delta Airlines, Ed Bastian, put out not one statement but two statements denouncing the Georgia law. Why? Because the Delta Airlines boss faced a “backlash” from left-wing activists unhappy with his first denouncement, so he issued a “more forceful” criticism days later to appease them, CNN reported.