Scott and Debbie Wells have taken five young women in need of mentoring into their home for an extended time. Sometimes the hospitality has lasted for years. The teens and young women usually came from troubled homes and didn’t have the wherewithal to begin living on their own.

“In most of these cases, they didn’t have the best foundations for implanting spiritual and relational skills,” Debbie says. “They were struggling with navigating through life.”

As adults, four of the five are now in stable married relationships. All are flourishing.

It all started in 2000 when Brittany Charise Jones, just 15, came to live with Scott and Debbie for a year. At the time Debbie — then only 25 herself — had been married just two years. Brittany moved in before the births of any of the three Wells children: Madison, 18; Aiden, 15; and Judah, 13.

As a child, Jones experienced sexual abuse for a decade from a series of her mother’s boyfriends. When Jones moved in with Scott and Debbie, they ensured that she received a Christian education until she graduated from high school. Jones, now 34, is worship leader at Motivation Church in Richmond, Virginia, where her husband Travis serves as pastor.

Scott Wells has been on staff at The Gate in Hammond, Indiana, since 1999. He currently serves as executive pastor and director of the church-affiliated nonprofit outreach arm Inner Mission and oversees The Gate’s homeless shelter and feeding program. Three times a week, The Gate’s Dream Center Food Pantry distributes groceries and clothing, plus offers counseling.

Scott and Debbie are Hammond campus pastors of The Gate. Debbie also has served as children’s pastor at the church the past 16 years.

The guests after Jones have been older and have stayed longer. Sometimes much longer, but that’s O.K.

“God brought the need in front of us each time,” says Wells, who now teaches at Calumet Christian School. “Each of the five girls faced different circumstances.”

Wells says she and her husband didn’t take in every wayward teenager who crossed their path.

“We have been discerning in protecting our own kids,” she says. “And we didn’t want to enable those who had made poor decisions.”

But the bonds formed with the five who took up residency remain strong.

The couple established boundaries and standards that included what the boarders could watch on television and who they could invite into the home. The tenants paid a nominal monthly rent to help pay for food and utilities (and to learn fiscal responsibility). Scott and Debbie also encouraged the roomers to attend church with them. But uniformly the women and Wells agree the most important lesson imparted involved healthy communication skills.

Sonya Schleitwiler needed a place to stay in 2010 after being in Masters Commission. Then 20, she met Debbie and Scott through The Gate.

“I was nowhere near making enough money to sustain myself,” Schleitwiler recalls. She ended up staying with the family for five years — until the day she wed Gerald Schleitwiler, whom she met at church. Gerald manages a pizzeria in Chicago.

Schleitwiler grew up without a father figure in her life, living in a trio of homes. At age 3, an aunt adopted her after her biological mother died. For most of her formative years, she lived with a sister, herself a teenage mom at the beginning of her stay. Throughout her childhood and adolescence, Schleitwiler says she felt as though she never could express herself. At the Wells home, Schleitwiler says she learned about healthy interaction.

“I needed to be mentored on how to communicate when I was upset, how to not bury every frustration,” Schleitwiler says. “I learned how to apologize, how to see the other person’s side, and how to work through our differences.” 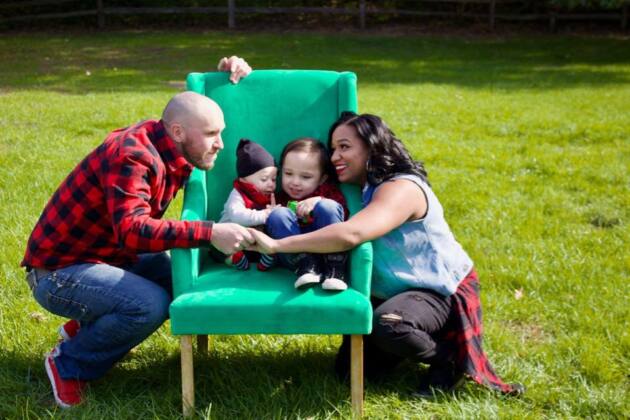 Gerald and Sonya Schleitwiler and their kids.

While growing up, Schleitwiler says she experienced depression and suicidal thoughts. She says she felt unwanted, unprotected, and untrusting. The opportunity to live with an ordinary, intact family came along at a crucial juncture.

“They provided a stable home with loving parents who were gracious and kind,” says Schleitwiler, now 30. “I never saw them have an argument; they never put each other down in front of others.” That modeling provided a cornerstone for her own marriage.

“The Kingdom principles they taught really marked me for a better future,” Schleitwiler says. “The impact they made on my life has a ripple effect on my husband, my kids, and generations to come.”

The Schleitwilers — who lives only a mile away — get together with the Wells family on Mother’s Day, Father’s Day, and Christmas. Their sons, 4-year-old Xavier and 2-year-old Moses, consider Scott and Debbie their grandparents.

Sarah Jane Carroll is the last young lady to live with Debbie and Scott. They likewise connected through The Gate. Carroll says she left a combative home and unhealthy family relationships at 17, realizing staying would be toxic.

She met Debbie and Scott at church and they counseled her regularly.

“They consistently loved and accepted me through my struggles, and they graciously walked me through them when some other Christians didn’t,” Carroll says. She moved in with the Wellses in 2012 and stayed four years.

“I finally had a safe place to heal and to figure out what is healthy and not healthy,” says Carroll, 28.

During a two-year overlapping stretch, three young women lived in the home’s roomy basement. Living with two others in similar situations helped Carroll to curb her independent, self-centered tendencies.

“I was difficult to deal with at times,” Carroll admits. “The experience of living there helped me learn how to deal with people different than me.”

Carroll married her husband, Tim, four years ago. They live in Houston, where Tim works for a refrigeration logistics company. The couple have a 19-month-old son, Jensen, and are expecting another child in June. Sarah works full time from home for a Chicago-based marketing company. Like Schleitwiler, Carroll says Debbie and Scott changed the trajectory of her life.

“They really have become my family,” Carroll says.

Ironically, the major pushback the Wellses received in the beginning of their expanded family venture came from Christian friends concerned for their safety and that of their children.

“People shouldn’t be afraid of God wanting to expand their home,” Wells says. “Hospitality — offering a place to stay — should be normal in the body of Christ.”

Previous: Emmys prove family shows are a thing of the past
Next: Are Evangelicals evil? That’s the term being thrown at 80 million Americans