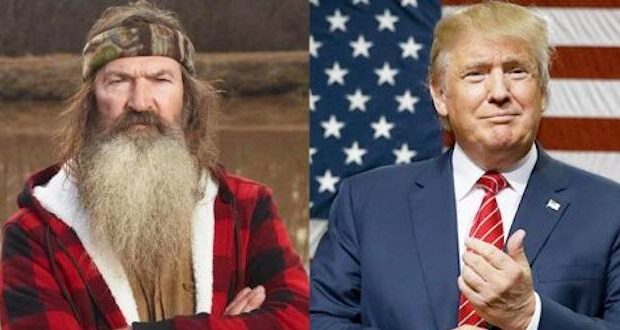 ‘I pointed him to Jesus’: Duck Dynasty’s Phil Robertson on meeting Trump

“Duck Dynasty” star Phil Robertson has revealed in a podcast interview the fascinating moment he shared the gospel with President Donald Trump.In the interview, Robertson says that he is confident the commander-in-chief has personally embraced the gospel of salvation through Jesus Christ. Robertson also told Brian Kilmeade on Fox and Friends in August that he “pointed him to Jesus.”

Robertson told the “Edifi With Billy Hallowell” podcast that he first met Trump during a pre-election get together in 2016. The two only had a few minutes together, but Robertson made the most of it, using the time to share the gospel with Trump.

“I reached in my pocket and I pulled out a diagram of the gospel, an arrow coming down out of heaven — God becoming flesh — the cross, the tomb, and an arrow coming out of the tomb and the last arrow coming back down to earth,” Robertson explained. “I said, ‘Whatever happens, Trump, don’t miss this.”

Trump asked for an explanation of the image and that’s when Robertson told him that Jesus died for his sins, explaining that Jesus came to Earth to redeem mankind.

Robertson believes the message had an impact, because Trump asked if he could keep the diagram. The two later talked again and Robertson again shared some important scriptures.

Robertson also talked about the positive influence of his “Unashamed” podcast and his TV show “Phil in the Woods.”

“All we’re doing is we’re reaching out to our neighbor, and we’re telling them to love their God, repent and turn to God, walk like Jesus did,” he said. “Love God and love your neighbor … I do not see the downside to that.”

The interview is just one of several instances where Christian leaders have spoken out about Trump’s salvation experience.

Edifi is filled with uplifting Christian podcasts, with categories ranging from Bible studies to women, marriage, kids, prayer and op-ed content. You can download the Edifi app here.

Previous: Why Kenosha may matter in November
Next: ‘We ask for continued prayers’: Liberty University begins Falwell investigation