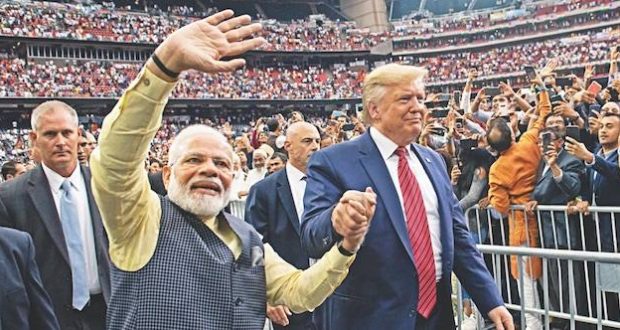 Trump and Modi were presented with a deafening mix of drums and cheers as they took to the stage at NRG Stadium around noon. The event was a massive show of support between the allies, despite some trade tensions.

Modi spoke first and began his remarks with praise, referring to Trump as a “very special person” who “needs no introduction.”

“Today, we are witnessing a new history and a new chemistry in the making,” Modi told the crowd. “Energy of NRG is a witness of synergy between India and the U.S.”

After Modi finished speaking, Trump escorted him off the stage and prepared to talk to the crowd. Modi could be seen joining the Indian audience, which started chanting “USA! USA!”

“Every day, Indian Americans help write the story of American greatness. … Everyone here has a crucial role to play in an even greater American and Indian future,” Trump said.

Trump also related concerns he has about the U.S.–Mexico border with India’s concerns about its border with Pakistan.

“Both India and the U.S. also understand that to keep our communities safe, we must protect our borders,” he said.

“You have never had a better friend as president than President Donald Trump,” Trump said. “Under PM Modi’s leadership, the world is witnessing a strong, sovereign republic of India.”

Approximately 50,000 Indian Americans were joined by Texas residents with Indian and American flags lining the stadium. Trump praised Modi for working to forge a “thriving republic of India.”

In his speech, Trump tied some of his efforts to Indian prosperity, noting new defense and trade efforts between the two countries, and said the United States is working closely with India to enhance space cooperation.

Tensions between Pakistan and India have flared over the disputed region of Kashmir. Pakistan recently refused a request from Modi to cross the country’s airspace for flights to and from Germany, Pakistan’s foreign minister said on Sept. 18. India is also concerned about terrorist activity from Pakistan-based organizations in Kashmir.

“Today, we honor all of the brave Indian and American military service members who work together to safeguard our freedom,” Trump told the crowd. “We stand proudly in defense of liberty, and we are committed to protecting innocent civilians from radical Islamic terrorism.”

Modi also referred to the recent decisions by his government to liberalize and reform India’s economy, including a reduction in corporate tax, saying it will make Indian companies competitive.

Trump said Modi asked him to speak at the event about four weeks ago, which he agreed to do.

The President, who is campaigning for a second term, has extremely high approval numbers with Indian Americans as well as other minority groups within the country.