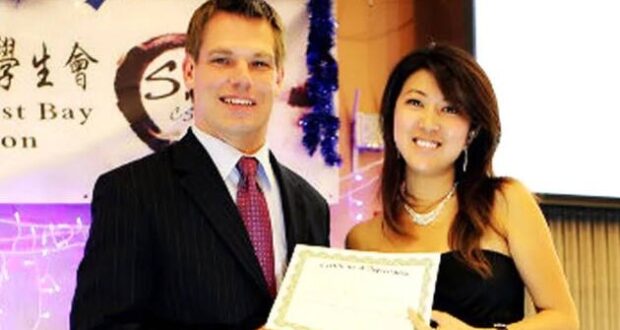 Eric Swalwell was just one of the California Democrats Fang had a relationship with. He refuses to say whether that relationship was sexual, claiming it's 'classified'

Did a Chinese spy compromise several U.S. officials in the San Francisco area before she abruptly left the country in 2015? That’s the allegations being made and they go all the way to Congress.

The spy, named Fang Fang or Christine Fang, was allegedly working for the Ministry of State Security (MSS), China’s chief intelligence agency. She maintained “unusually close ties” with the Chinese consulate, after she enrolled as a student at California State University East Bay (CSUEB) in 2011, according to a recent investigative report by Axios.

According to the outlet, Fang was believed to have helped place “unwitting subagents” in local political and congressional offices, but it was unlikely that she received or passed on classified information. Nonetheless, she collected private information about U.S. officials, including their habits, schedules, social networks, and rumors about them.

She also used campaign fundraising, networking, and romantic or sexual relations with at least two mayors from cities in the Midwest to “gain proximity to political power,” according to Axios.

Chinese agents with ties to the MSS have recently been prosecuted in a number of U.S. criminal cases. In March, a California man, who was recruited by MSS during his trip to China in 2015, was sentenced to four years in prison after he was found guilty of handing over classified U.S. national security information to MSS officials in China.

Fang was active in CSUEB campus activities, serving as president of the university’s Chinese Student Association and president of the school’s chapter of the Asian Pacific Islander American Public Affairs (APAPA), a nonprofit that encourages Asian-Americans to be involved in civic and public affairs.

She grew her influence among U.S. politicians by attending regional mayoral conferences.

In one instance, Fang had a sexual encounter with an unnamed Ohio mayor in a car that was under FBI (Federal Bureau of Investigation) surveillance. She told the mayor she was interested in him because “she wanted to improve her English,” according to the outlet.

Fang also became close with Rep. Eric Swalwell (D-Calif.). According to the outlet, she helped raise money for the lawmaker’s 2014 re-election campaign, although she did not make any donations herself, nor was there any evidence of illegal contributions.

Swalwell’s office, in a statement to Axios, said the lawmaker ended ties with Fang in 2015 after he was alerted by federal investigators about their concerns regarding Fang’s activities.

Fang came under the attention of federal investigators during their surveillance of another suspected MSS officer, who worked undercover as a diplomat at the Chinese consulate in San Francisco, according to the outlet.

“The suspected officer used the consulate as a base to do outreach to state and local-level U.S. politicians, including inviting them on trips to China,” said an unnamed current U.S. counterintelligence official to Axios.

“I’ve long sounded the alarm on how China cannot be trusted. They’re a country who seeks to dominate and destroy anyone in their path,” Crawford stated.