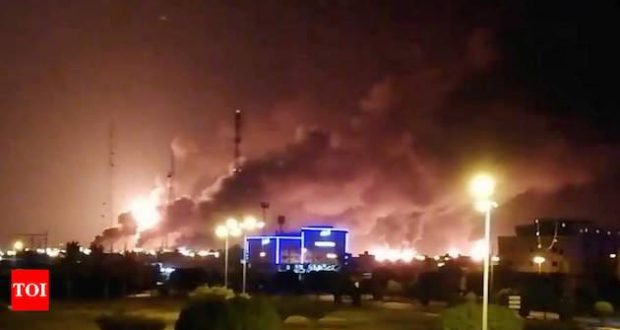 Drone attack takes out half of Saudi oil production

Smoke is still blackening the skies over large areas of Saudi Arabia Sunday morning after an attack by  Iranian drones operated by rebels in Yemen on Saturday. The attack and resulting fires shut down half of Saudi Arabia’s oil production facilities after “coordinated drone strikes on facilities in [its] Eastern Province” created a raging firestorm visible from space. The Hijra Khurais oil field and Abqaiq, are the world’s largest oil stabilization facility according to the Wall Street Journal reported.

Yemen’s Houthi rebels, who took control of Yemen’s capital of San’a in 2014 and have been targeted by Saudi Arabia in a vicious counter-insurgency campaign that has killed thousands of civilians, took credit for the attack, according to the Journal. The Houthi’s are supported by Iran and have Revolutionary Guards embedded in their rebel troops.

A panel of experts told the United Nations Security Council that the Houthis had acquired drone technology from Iran in January 2018, according to the New York Times. Though the Houthis have used drone strikes before, at a distance of 500 miles from Yemen this attack would be deeper into Saudi territory than prior missions and (if the rebels are to be believed) involved 10 drones. According to the Associated Press, Houthi drone capabilities have steadily increased from off-the-shelf models to “versions nearly identical to Iranian models,” with the United Nations, Gulf nations, and the West saying Iran has supplied the rebels with weaponry.

The AP wrote that there are some indications that Saudi security forces tried to shoot down the drones, apparently to limited success:

First word of the assault came in online videos of giant fires at the Abqaiq facility, some 330 kilometers (205 miles) northeast of the Saudi capital, Riyadh. Machine-gun fire could be heard in several clips alongside the day’s first Muslim call to prayers, suggesting security forces tried to bring down the drones just before dawn… In daylight, Saudi state television aired a segment with its local correspondent near a police checkpoint, a thick plume of smoke visible behind him.

The fires began after the sites were “targeted by drones,” the Interior Ministry said in a statement carried by the state-run Saudi Press Agency. It said an investigation was underway.

A Houthi military spokesman, Yahia Sarie, said on the Houthi-run Al-Masirah satellite news channel that rebel forces had received “intelligence” from within Saudi Arabia and that “The only option for the Saudi government is to stop attacking us,” the AP wrote.

Yemen is the Arab region’s poorest country, and the civil war that began there in 2015 has since spiraled into one of the world’s greatest ongoing humanitarian catastrophies. The U.S.-based Armed Conflict Location & Event Data Project estimates that roughly 90,000 people have died as a result of the conflict, , and the Saudi-led and U.S.-backed coalition has reportedly engaged in atrocities such as the bombing of markets, hospitals, weddings, and in one instance a bus carrying dozens of children.

The Saturday attack is a major escalation not just because the rebels are repeatedly proving they can carry out long range, precision drone attacks, but because it will only serve to increase tensions between the U.S. and its allies and Iran.

As markets open it is expected that the disruption of oil production will increase crude prices.

Previous: Kansas City’s James A. Reed and his rise to power
Next: Margin KC brings Dave Ramsey’s teaching to more than 100 local churches