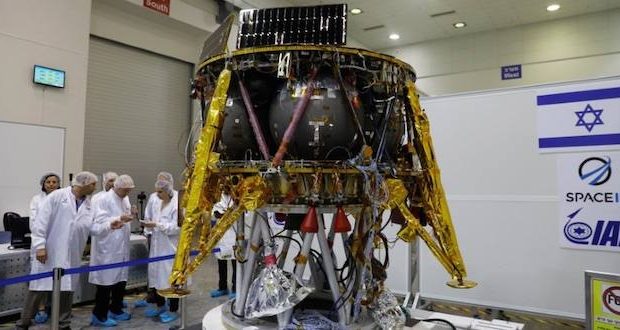 Israel is set to join an exclusive club in February with the launch of an unmanned spacecraft that will land on the Moon. If successful, Israel would become the world’s fourth nation to accomplishment it – a feat only Russia, the United States and China have achieved.

Officials from the Israeli organization SpaceIL and its project partner, the state-owned Israel Aerospace Industries, announced that the landing craft, named “Beresheet” in Hebrew for Genesis, will ship in February to Florida. After delivery into space by a SpaceX Falcon rocket, the robotic lander will then begin its months-long and dangerous voyage to the Moon.

It had been slated to launch this month but has been postponed. SpaceIL said it had no control over the launch’s delay, and that SpaceX, the private space exploration company founded by entrepreneur Elon Musk, notified them that its rocket will now lift off in February 2019 without providing an explanation.

“After eight challenging years, I am filled with pride that the first Israeli spacecraft, which is in its final construction and testing phases, will soon be making its way to the moon. The launch of the first Israeli spacecraft will fill Israel, in its 70th year, with pride. It’s a national accomplishment that will put us on the world’s space map.” Morris Kahn, president of Israeli nonprofit organization SpaceIL said.

Israel Aerospace Industries manager Opher Doron stressed that the small craft, roughly the size of a washing machine, faces a “difficult, arduous journey” because it will have to make several orbits before touching down on the moon. Upon landing, the craft is to relay photographs and collect data about the moon’s ever-changing magnetism for research by Israel’s Weizmann Institute and NASA.

On Monday, SpaceIL representatives presented a time capsule that will accompany the spacecraft to the moon.

The capsule, in the shape of a DVD, holds pictures of the Israeli public, interpretive drawings by Israeli children including Christians, Jews and Muslims, and other pieces of national memorabilia, including stories of Holocaust survivors.

“We hope that far in the future, when travel to the moon is as common as trans-Atlantic travel, that children will be able to understand the lives of their Israeli ancestors through this archive on the moon,” said SpaceIL co-founder Yonatan Winetraub.

A crowd of Israeli reporters, clad in sanitized white coats, burst into applause as Winetraub fastened the capsule to the underbelly of the craft.

SpaceIL was founded in 2011 and originally vied for Google’s Lunar Xprize, which challenged private companies to try to land an unmanned spacecraft on the moon.

SpaceIL has vowed to continue the mission and hopes that its ambitious $95 million project, largely funded by South African-Israeli billionaire Morris Kahn and other donors, will spur a new wave of commercial missions to the moon and jump-start new companies.

“We’re trying to replicate the Apollo effect in the US,” Kahn said, a reference to US Apollo mission that took first humans to the moon in 1969.

“As we went deeper into the project and the more people joined, we understood its complexity.” Israeli scientist Kfir Damari said.

Israel’s lunar mission is a small but important step in the right direction. The mission’s success could speed up space exploration and inspire the nation’s scientific community and general people.

On the moon, the spacecraft is expected to be operational for two days and will transmit data to the control center at IAI until its systems shut down.

Previous: Archaeologists announce Exodus evidence
Next: How generosity adds years to your life