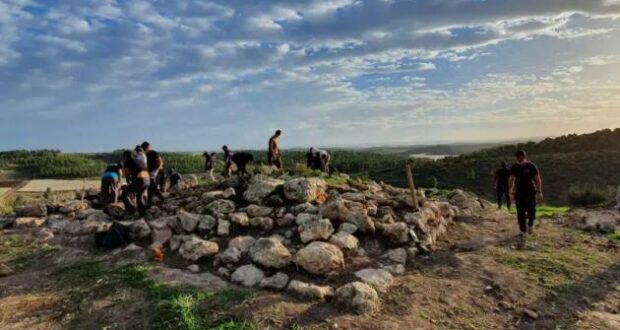 The excavation revealed a well-fortified 50-foot-by-50-foot building that had been destroyed. Montagu said they uncovered the walls of the structure, which were nearly 10 feet wide and sloped to prevent invaders from scaling the wall.

READ: The miraculous connection between Hanukkah and Christmas

“We also uncovered a destruction layer, which in it we found hundreds of artifacts, including pottery and coins and weapons, which we dated back to the second century BC,” Montagu said. “We believe that the destruction was done by the Hasmoneans as part of their conquest of Idumea in 112 BC.”

Idumea was the name for the area at the time and comes from the biblical name Edom. The structure would have been about 16 feet tall, with seven rooms and a stairwell leading to a second floor.

“The destruction layer was about half a meter, and here we have the wood blocks from the roof,” Montagu said. “We believe that the roof collapsed and on the roof the rest of the walls and the building. During the excavations we took out hundreds of stones,until we reached the destruction layer.”

Although Hanukkah, also known as the Feast of Dedication, isn’t mentioned in the Old Testament, it is in the New Testament in John 10:22-23. “We know the stories of the Jews against the Greeks, and this is just the proof of that happening,” he said.

The site was full of treasures such as small jars used to hold mostly expensive materials such as oils or perfumes; a bronze pin used to hold together a piece of clothing, pottery shards, dozens of coins and part of a sword. Although this area will eventually be open for the public, experts say the most exciting part is how the excavation breathes life into history from 2,000 years ago.

According to MyJewishLearning.com, “the eight-day festival of Hanukkah has become a beloved and joyous holiday. It is also known as the Festival of Lights and usually takes place in December, at the time of year when the days are shortest in the northern hemisphere.”