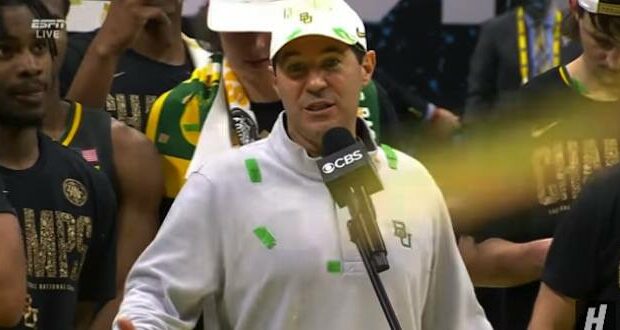 Baylor basketball coach Scott Drew discussed his faith on national television after his team won the NCAA championship on Monday evening. During a post-game interview on CBS, Drew mentioned his faith as a key to the team’s success.

“Our guys have been motivated all year,” he said. “It’s a player-led team. We’re so blessed to have unbelievable upperclassmen in leadership. But we play with a culture of joy. And it’s Jesus, others, yourself. They came out and they fed off of each other. We got off to a great start. And then defensively, we’re pretty good.”

That culture of J.O.Y. is something the Bears have talked about all year, and it’s even posted in the team’s official Twitter bio.

Baylor is a Christian university with a mission to “educate men and women for worldwide leadership and service by integrating academic excellence and Christian commitment within a caring community,” according to its website. It was Baylor’s first national championship in basketball and its first Final Four appearance since 1950. Drew took over the program in 2003 following a scandal under the previous coach and guided the Bears through multiple years of probation. Baylor made the NCAA Tournament in Drew’s fifth season as coach and the Elite Eight twice before this year’s breakout season.

Within moments of securing the championship, Baylor’s entire team stopped to gather into a circle on the court. They gave God thanks in prayer.

As Gonzaga did in the regular season, Baylor may have gone undefeated, too, if not for COVID-19, Drew said. The Bears were 18-0 when they had to pause the season. They lost the first game after the shutdown to Kansas and then lost once more to Oklahoma State.

“Prior to COVID, us and Gonzaga were on track to be undefeated,” Drew said. “I’ve got so much respect for (Gonzaga Coach Mark) Few. He’s such a humble servant coach and a Hall of Fame coach and what they’ve done this year. But if you’re going to war and I’m coaching, I’m taking these guys.”

Previous: Missouri and Kansas will not require vaccine passports
Next: Video of abandoned and weeping boy highlights Biden border crisis