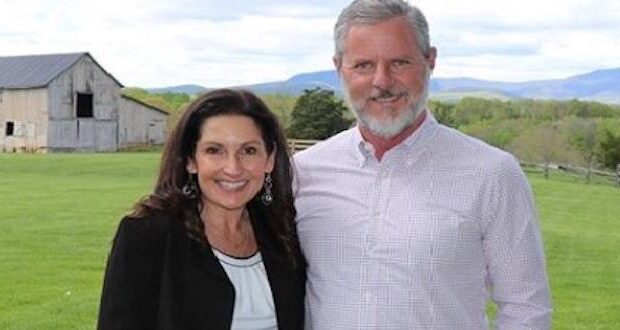 Jerry Falwell Jr. has released a letter explaining his highly criticized recent actions. The suspended president of Liberty University was recently the center of a string of embarrassing incidents and released a letter Sunday explaining contributing factors to his behavior.  In the letter, Falwell admits that he has suffered depression caused by a former family friend threatening to reveal his affair with Falwell’s wife Becki.

In the statement, printed by the Washington Examiner newspaper, Falwell for the first time revealed his wife Becki’s affair saying that it was brief and that the couple were quickly reconciled.

The Falwell’s claim her former lover threatened them over the past several years and that they are just over with it hanging over their lives and head by the secrecy they attempted to shroud it in.

“I’m just tired of it,” said Falwell of the anxiety he’s felt about the affair becoming public and embarrassing his family and Liberty. “It’s just got to end,” he added.

An active social media presence by Falwell raised eyebrows after a recent post of a picture, a “costume party” picture of him on a yacht with his pants partially unzipped and his arm around his wife’s assistant. After the incident, the Liberty board of directors put Falwell on paid leave.

My family has been blessed with the opportunity to serve Christ and our community over the past 50 years — from when my father founded Liberty in the early 1970’s through today. When my father suddenly passed away in 2007, I quickly and unexpectedly went from being the lawyer working in the background on the business aspects of the school to becoming a very public person, having to overcome my fears of speaking in front of audiences of tens of thousands, with many more responsibilities to the Liberty community and to my own family.

My priority was to build on my father’s vision and to work hard. Thanks to the help of the Board and the extraordinary Liberty faculty, executives, staff and community, we have ensured the University’s sustained growth and financial health while providing the best and most modern on-campus and online educational and spiritual resources to a wider range of students both in person and through digital platforms.

My commitment to Liberty became and has remained my primary focus — and while I am so grateful and thankful for our collective successes, I also realize in hindsight that there was a toll that this took on me, which extended to my family too. During this time of reflection for us and this especially challenging year, and even more so following the events of the past few weeks, my wife Becki and I agreed that this was the right time for me to share more of our story, because the Liberty community deserves to hear it directly from me and from us.

During a vacation over eight years ago, Becki and I met an ambitious young man who was working at our hotel and was saving up his money to go to school. We encouraged him to pursue an education and a career and we were impressed by his initiative in suggesting a local real estate opportunity. My family members eventually made an investment in a local property, included him in the deal because he could play an active role in managing it, and became close with him and his family.

Shortly thereafter, Becki had an inappropriate personal relationship with this person, something in which I was not involved — it was nonetheless very upsetting to learn about. After I learned this, I lost 80 pounds and people who saw me regularly thought that I was physically unwell, when in reality I was just balancing how to be most supportive of Becki, who I love, while also reflecting and praying about whether there were ways I could have been more supportive of her and given her proper attention. I came to realize that while it may be easy to judge others on their behavior, the King James Bible reminds us — “Thou shalt not commit adultery, but I sayeth unto you, that whoever looketh upon a woman to lust after her hath committed adultery with her in his heart.” In fact, there are ways we may all be sinning, but the Lord believes in this self-reflection.

I was and have always remained fully devoted to Becki and we have shared many private conversations to better understand and support each other and to strengthen our marriage. Thankfully, our love has never been stronger. Becki and I forgave each other, because while her indiscretion may have been more obvious and apparent, I realized that there were important smaller things I needed to do better too.

In Ephesians 4:32 we learn — “Be kind to one another, tender hearted, forgiving as God in Christ forgave you.”

We extended the spirit of forgiveness to this man with respect and kindness, both for spiritual and religious reasons, and in the hope that we could help him find his way and allow us to put this behind us, without any harm or embarrassment to our family or to the LU community to which we have dedicated our lives.

During the years that followed, we got to know his family and other loved ones, good people who also really care about him. They shared and confirmed to us that he has periodically demonstrated emotionally unstable behaviors with some destructive tendencies, seemingly in response to his inability to achieve his professional goals. Based on information from other sources, we believe that he may have targeted other successful women in similar ways.

While we tried to distance ourselves from him over time, he unfortunately became increasingly angry and aggressive. Eventually, he began threatening to publicly reveal this secret relationship with Becki and to deliberately embarrass my wife, family, and Liberty University unless we agreed to pay him substantial monies. While this was very upsetting, we had been advised by trusted legal counsel that it was best to maintain contact with this person, as we tried to manage his increasingly erratic behavior and unreasonable demands while extricating ourselves from him both on a personal level and from that real estate transaction.

While completely dedicating ourselves to Liberty, we were also suffering in silence during our personal time together, while simultaneously trying to manage and deal with this increasingly threatening behavior, which only worsened over time. We were doing our best to respectfully unravel this ‘fatal attraction’ type situation to protect our family and the University.

Even years after the improper relationship had ended, this person continued to be aggressive with Becki and me in a variety of ways. We finally decided that we had to further withdraw completely from him, which resulted in him stepping up his threats to share more outrageous and fabricate claims about us (under the guise of that business entity). He clearly moved forward with this plan through a specific member of the media who has continued to badger us, as well as other members of the media, regarding the false claims about the nature of the relationship based on the individual’s misrepresentations. Over the course of the last few months this person’s behavior has reached a level that we have decided the only way to stop this predatory behavior is to go public.

We have categorically rejected this person’s demands while dealing with him and this particular member of the media who seemed just as obsessed with the prurient, untrue aspects of this story, however fantastic.

Even though I continued successfully working with our entire Liberty team to achieve so many of our goals, I am now dealing with things in a way that I should have done before —including seeking to address the emotional toll this has taken. I shouldn’t have been afraid to admit my vulnerabilities and to reach out for assistance from the mental health professionals who could have alleviated this pain and stress. I am committed to speaking out and sharing with others at Liberty the importance of seeking counseling instead of thinking you need to be tough and try to bear these burdens on your own. I am in the early stages of addressing these issues.

Proverbs 3:5-6 says “trust in the Lord with all your heart and lean not on thine own understanding in all your ways acknowledge him and he will guide straight thy path.”

The trauma of this experience has brought us to a very challenging point in our lives, but we are strong, our faith in Christ is greater than ever, and with His help and with those in the community who we love and who appreciate the impact of forgiveness, we will get through this. We ask for your prayers and support.

For more on Falwell and his explanation read the full story HERE.