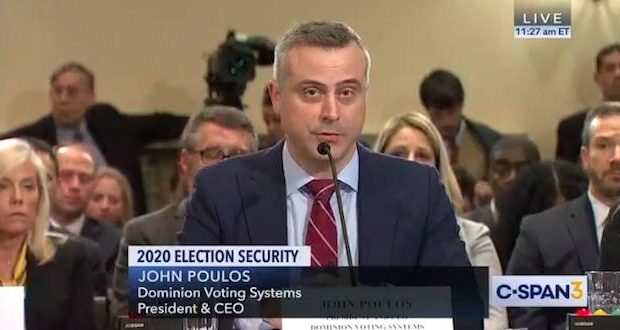 The initial audit of Dominion Voting Systems machines in Michigan has given more credibility to fraud allegations, President Donald Trump and others asserted Tuesday.

The in-depth forensic report states that Dominion’s machines and processees are “intentionally and purposefully designed with inherent errors to create systemic fraud and influence election results.”

The ivestigation comes as Dominion CEO John Poulos admitted to legislators during a Tuesday Michigan Senate committee hearing that Dominion machines were connected to the internet, which is against federal election law.

“For the few jurisdictions, less than one percent of our customer base, an external cellular modem is required,” Poulos claimed, saying an external modem sits outside a device and allows Internet access.

One percent of counties would make that over 30 while the four counties in Michigan, Pennsylvania, Georgia and Wisconsin are the focus of millions of votes that allegedly came in after official counting stopped.

A Dominion contractor and a poll challenger stated last month that voting machines at one of those counties, the TCF Center in Detroit, were indeed connected to the Internet.

It was not reported if the internet-connected machines were part of the alleged fraud discovered in the system audit of machines in Michigan.

We further conclude that the results of Antrim County should not have been certified,” Russell Ramsland Jr., co-founder of Allied Security Operations Group

“The system intentionally generates an enormously high number of ballot errors. The electronic ballots are then transferred for adjudication. The intentional errors lead to bulk adjudication of ballots with no oversight, no transparency, and no audit trail. This leads to voter or election fraud. Based on our study, we conclude that the Dominion Voting System should not be used in Michigan. We further conclude that the results of Antrim County should not have been certified,” Russell Ramsland Jr., co-founder of Allied Security Operations Group, wrote in the document.

Ramsland and others inspected and performed forensic duplication on the county’s election management server, which was running Dominion Democracy Suite 5.5.3-002. They also obtained flash cards and USB sticks.

The examination was approved by 13th Circuit Judge Kevin Elsenheimer earlier this month. The judge on Monday agreed to remove a protective order that had been blocking the public release of the report, as long as code that it contained was redacted for the time being.

President Donald Trump, Republican leaders and the campaign’s legal team spoke about the alleged fraud saying the issue is now bigger than one election, especially in light of Chinese connections to members of Congress.

Attorney Jenna Ellis, called it “incredibly important to the election integrity effort as a whole.”

Trump, with a larger megaphone through social media, echoed his attorneys’ sentiments.

“This is BIG NEWS. Dominion Voting Machines are a disaster all over the Country. Changed the results of a landslide election. Can’t let this happen,” Trump stated, sharing a post that actually included the report.

In another, he stated the election cannot stand and encouraged Republicans to “Get moving…”

Trump praised the judge who allowed the audit, calling him “highly respected.”

State officials have been foreced to respond the scientific audit and report but could not explain how it happened across the board. In a court filing, Michigan Elections Director Jonathan Brater said it “attributes changes in reported vote totals, all of which appear to be a result of human error and which appear to have been identified and corrected during the county canvass, to alleged ‘intentional’ design elements in Dominion Voting Systems, without explicating why this would be the explanation.”

The Electoral College met Monday voting, with the current totals, to name Joe Biden as President-Elect. Consititional scholars, however, point out that Monday’s date is arbitrary and not found within the Constitution meaning there is sufficient time for appropriate investigation before the inauguration Jan. 20. On Monday night, Biden alleged voter fraud did not occur in the Nov. 3 election and called on Trump to concede.

A poll finds that almost 85% of Republicans believe election fraud occured that tipped the election to Biden. One in ten Democrats also believe the election was fraudulent.