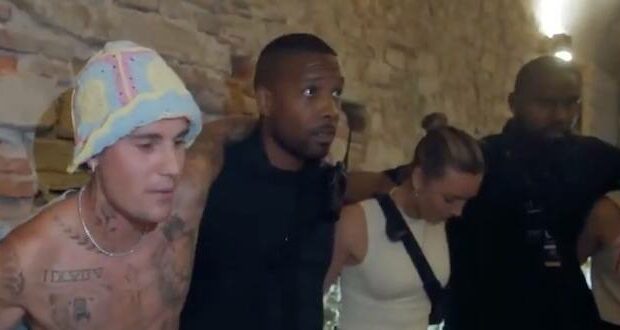 Bieber and the crew open tour in prayer after health concerns paused it.

Justin Bieber has resumed performing after world tour dates were canceled. The health crisis, which precipitated the schedule disruption, was his diagnosis with Ramsay Hunt syndrome.

The singer, 28, gave his first performance on Sunday, July 31 at the Lucca Summer Festival in Italy and thanked the audience for their patience.  “Guys I want to say thank you so much for having me back,” he told the crowd as he bounded onto the state.

The performance was preceded by a prayer led by crew member Ldubza with members of the crew and band joining Bieber, 28, and wife Hailey.

“We’re thankful for protecting us in our travelling mercies,

“We thank you for the people here in Italy and this opportunity, just to bring a message of love to these folks.

“We thank you God, for Justin in this moment that he has to share his message of hope and love.

“We pray God will give him strength, will give the band strength, the dancers strength and at the end of the day, God lives will be changed and impacted by this message.

“We thank you for this moment.

Bieber, who is finding his way as a young Christian, had canceled his Justice World Tour dates due to partial facial paralysis that prevented him from speaking and singing clearly. He said at the time stated he was “trusting in God” for his healing.

His wife, model Hailey Bieber, was also in attendance and was spotted recording her husband as he sang “Peaches.”

“One thing I know for certain is you can’t keep this guy down…” Hailey, 25, captioned her hubby singing “Holy” on her Instagram Story.