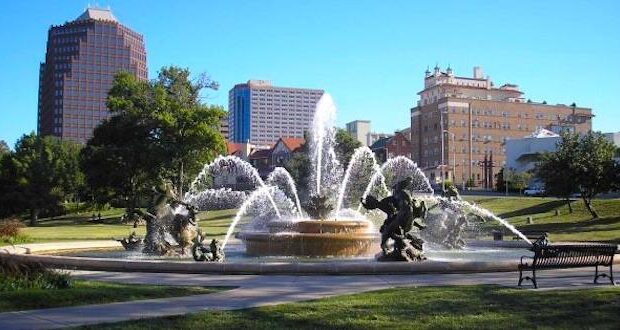 Chris Goode, commissioner of the Kansas City, Mo., Parks and Recreation Board, presented a letter to the board this week requesting the renaming of both J.C. Nichols Parkway and the J.C. Nichols Fountain on the Country Club Plaza.

Activists say Nichols’ policies are responsible for segregation, redlining and racial divides throughout the metro. Some historians believe Nichols is behind the stark difference between the east and west sides of Troost Avenue while other historians disagree.

“The fountain named in his honor, as well as the adjoining parkway allow racism to take center stage in our most photographed, valued and visited destination in Kansas City,” the letter said. “It says to the diverse taxpayers of our community, along with visitors from throughout the country in very obvious terms; racism is a norm we are not ready to truly eradicate.”

Although nothing has been finalized, suggestions include naming the parkway after Martin Luther King and calling the fountain the Dream Fountain.

Board members said they have initiated the process to consider the name change. “Considering current events, the KC Parks Board feels it is imperative to move swiftly as well as thoughtfully to ensure this process is transparent and inclusive,” it said in a news release

“No person accelerated white flight, redlining, and racial division in the Kansas City area more than J.C. Nichols,” he said. “The time has long passed that we remove Kansas City’s memorials to his name. I fully support Commissioner Goode’s efforts to rename J.C. Nichols Fountain and Parkway.”

The release went on to say that staff will work with the board of commissioners to ensure the process is fair and transparent. Two citizen engagement sessions will also be scheduled within the next 30 days. Residents can send questions and comments to kcparksengage@kcmo.org.

In 1970, members of the terrorist group Students for a Democratic Society (SDS) were charged with pipe bombing the home of his son Miller Nichols, then president of the J.C. Nichols company, among other places in Kansas City. Nichols was a  pioneer in incorporating environmental elements into his neighborhood by creating green space and, clean watersheds and tree planting. But, like most developers across the nation, incorporated deed restrictions that, until a Supreme Court ruling in 1948, kept many ethnic communities including Italians, blacks, and hispanics out of certain neighborhoods.

Many question the wisdom of renaming or destroying symbols of the nation’s past. When the monuments and names of our past is gone, they say, what evidence will remain?

Renaming J.C. Nichols Parkway and fountain may present a problem for Kansas City, which is in Jackson County. The county is named after former President Andrew Jackson, a slave owner.

Previous: Trump defunding of Planned Parenthood upheld in court
Next: ‘Wretched’ may be #1 but family films rule theater-free season