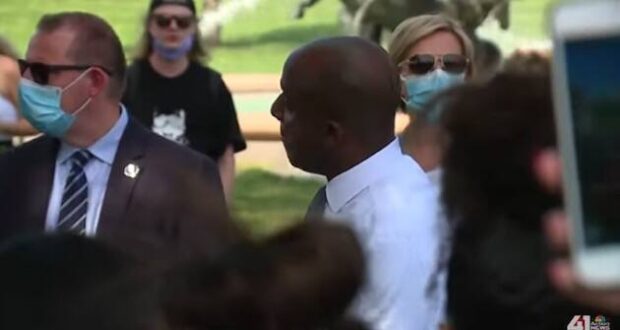 Kansas City Mayor Quinton Lucas, without a mask, speaks to protesters who were also not social distancing.

Kansas City Mayor Quinton Lucas announced he will enforce only the city’s reopening rules, not the more stringent ones from the state of Missouri. Even the liberal Kansas City star, which has been an unabashed supporter of the mayor, stated it was a bow to “reality.”

“We all recognize that, as we reopen, it’s important that we have clear rules, and that’s why we are instituting, frankly, almost one clear rule,” Lucas said. “It is just merely a 50 percent capacity rule… Our sole requirement will be that 6-foot social distancing.”

However, Gov. Mike Parson announced that the state would be extending Phase 1 of its “Show Me Strong Recovery” plan. Under this phase, businesses are only allowed to have a 10 percent-25 percent capacity, depending on the size of the business. Parson has come under intense scrutiny for reopening rules that seem harsh, considering the state’s infections are primarily in three large cities.

READ: In move that came too late, Gov. Parson will now crackdown on rioters

Morgan Said, director of the communications with the Mayor’s Office, said the governor has always allowed local municipalities to make their own guidelines. Parson tweeted Thursday night that local municipalities must still follow state rules. Local officials will still have the authority to put further rules, regulations, or ordinances in place so long as they are not inconsistent with the statewide order, Parson said in the tweet.