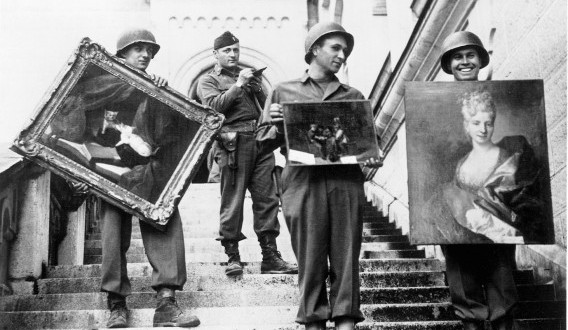 A 1940s photo of G.I.'s recovering stolen loot. Nazi Germany stole what they liked and burned the rest.

Langdon Warner, from Kansas City, was a real-life “monuments man” in helping to recover art stolen by Nazi Germany.

Kansas City, Mo.– As excitement builds for the release of the Sony film The Monuments Men, Kansas City’s Nelson-Atkins Museum of Art is recognizing six real-life Monuments Men who either worked in or closely with the museum. Monuments men and women, commissioned by Franklin D. Roosevelt during World War II, were tasked with the protection, recovery and preservation of millions of Europe’s masterpieces during the Nazi occupation.

“The men and women involved in this selfless effort to keep art objects safe during a dangerous time in history showed immense courage,” said JuliÃ¡n Zugazagoitia, CEO & Director of the Nelson-Atkins. “We are deeply in their debt for preserving these treasures for humanity.”

A display of archival materials will be on view in Bloch Lobby that includes postcards, manuscripts, newspaper clippings and biographies of the Nelson-Atkins’ Monuments Men.

“My research has shown that these six men brought to their military duties the same passion for art and culture that made them so valuable to the Nelson-Atkins,” said MacKenzie Mallon, a researcher in the European Painting & Sculpture Department who has been working on this project for many months. “They took their responsibilities as protectors of these monuments very seriously.”

The museum employed four of the Monuments Men and maintained strong ties with two others. Paul Gardner, the first director of the Nelson-Atkins, served as Director of the Fine Arts Section of the Allied Military Government in Italy. Another former director, Laurence Sickman, was assigned to General Douglas MacArthur’s Tokyo headquarters after the Japanese surrender and served as a technical advisor on collections and monuments, making trips to China and Korea to assess the level of damage to monuments in those countries. He was awarded the Legion of Merit for his war services.

Langdon Warner served as the Asian art advisor to the Trustees of the Nelson-Atkins in 1930, and was a close colleague of Sickman. He helped found the American Defense — Harvard Group, a precursor of the Roberts Commission, Roosevelt’s task force. James A. Reeds served with the Monuments, Fine Arts and Archives section in France in 1944. He taught linguistics at University of Missouri at Kansas City and served as a docent for the Nelson-Atkins.

One of the finest examples of 18Â­th century portraiture at the Nelson-Atkins, Nicolas de LargilliÃ¨re’s Augustus the Strong, Elector of Saxony and King of Poland, was found by the Monuments Men in a bomb-rigged salt mine in Alt Aussee, Austria, and returned to Clarice de Rothschild, whose family owned the painting. It was purchased by the Nelson-Atkins in 1954 after Rothschild sold it to an art dealer in New York.

During World War II, the Nelson-Atkins also served as a safe house for more than 150 paintings and tapestries from collections on the East and West coasts.

U.S. Senator Roy Blunt from Missouri recently introduced a bipartisan bill that would award Congressional Gold Medals to all 350 of the men and women referred to as Monuments Men.

“The Nelson-Atkins has a rich history which is only enhanced by the individuals who have worked there,” said Senator Blunt, a Republican. “These Monuments Men protected historical artifacts from destruction and saved these treasures for future generations. I am proud to introduce legislation to award the Congressional Gold Medal to the men and women who fought to preserve this priceless history.”

The Monuments Men, starring George Clooney and Matt Damon, will be released nationally on February 7. For more information on the film, visit epk.tv. The film is based on the book The Monuments Men: Allied Heroes, Nazi Thieves and the Greatest Treasure Hunt in History by Robert M. Edsel, who continued his investigation into the soldiers who rescued cultural treasures in Saving Italy. The latter book discusses the heroism of former Nelson-Atkins director Paul Gardner. Edsel has created the Monuments Men Foundation for the Preservation of Art, which honors the legacy of the Monuments Men. For more information, visit monumentsmenfoundation.org.

Previous: Vanessa Hudgens makes her mark as a serious actress in inspiring new film Gimme Shelter
Next: Where are Christians most at risk?