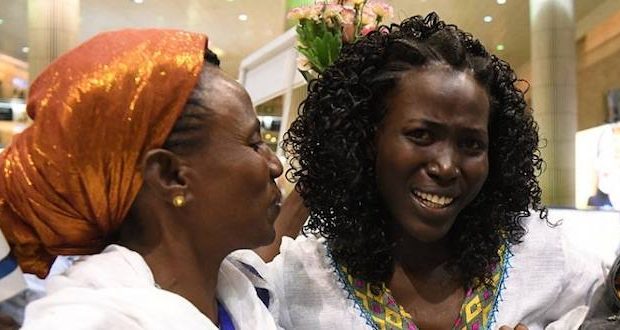 Suzy Markoriel, right, and her mother are reunited at Ben-Gurion Airport.

The last remaining Jews of South Sudan finally arrived in Israel this week after being separated from their relatives for more than 10 years.

Suzi Makoriel and her three children made the long-awaited trek from the African country and arrived as new immigrants to the Jewish state.

There to meet them at Ben Gurion International Airport was Makoriel’s mother, who was separated from her daughter more than a decade ago.

Their story began in the early 1980s during Operation Moses, when Israel smuggled 14,000 Ethiopian Jews though South Sudan to Israel. Thousands died along the way and 88 people went missing.

Makoriel’s mother was one of the thousands of Ethiopians attempting to flee to Israel 30 years ago. However, she was kidnapped and taken to a South Sudanese prison. Arutz 7 reports she was sold into a forced marriage and had several children.

She and some of her children made it back to Ethiopia, but two of her daughters were forced to marry local tribesmen in Sudan.

Binyamin resident Aharon Tsuf, who has dedicated his life to bringing Ethiopian Jews to Israel, told Israel Hayom he met Makoriel’s mother about a year and a half ago during one of his trips to Ethiopia.

Makoriel’s mother told Tsuf her story and he began to plan how he could bring the mother from Ethiopia and her two daughters still in South Sudan to the Jewish state.

“I was touched by the story. I realized that if I didn’t help this family, no one would,” Tsuf said.

Tsuf enlisted the help of Suzi’s brother to find her and her sister. They then left South Sudan and traveled to Ethiopia, where they saw their mom for the first time after a long absence.

“It was the first time they had seen their mother in 10 years,” related Tsuf.

Tsuf brought Suzi’s mother and sister to Israel earlier this year where they stayed at his home. Meanwhile, Suzi went back to South Sudan to prepare her children for their final journey home to Israel.

Finally, with the financial support of friends, African Christians who love Israel, and government officials, Suzi and her children arrived in Israel Tuesday.

“It was hard to get here. In the end, she took an eight-day bus ride from South Sudan to Ethiopia via Uganda and Kenya. Halfway there, she got lost and went back. The project encountered a lot of difficulties. We’re talking about countries that have no identity cards or good communications,” Tsuf said.

Suzi was greeted with smiles and hugs when she arrived.

“After an exhausting year and a half, this unbelievable moment has arrived. I’m tearing up,” Tsuf said.