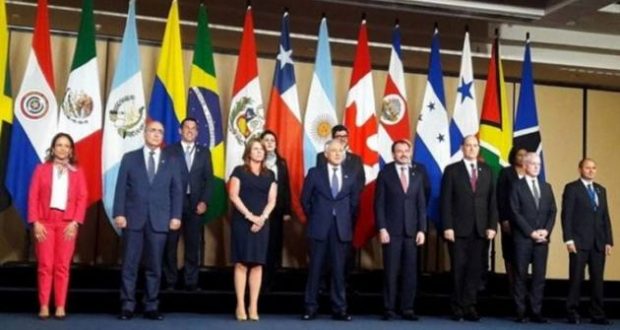 Members of the Lima Group, which is isolating the socialist regime of Venezuela with sanctions.

BOGOTA, Colombia—Thirteen countries from across the Americas have slammed Venezuela President Nicolas Maduro and introduced new economic and political sanctions in an effort to asphyxiate his regime. The measures were agreed as the Lima Group announced it wouldn’t recognize Maduro as the legitimate ruler of the Andean nation at its latest meeting Jan. 4.

Twelve Latin American nations and Canada denounced a “rupture of constitutional order” under Maduro and asked him to “cede power to the National Assembly,” the opposition-run congress, when his second six-year term is set to begin Jan. 10.

“The [Maduro] regime is bent on perpetuating its own power and in doing so it has destroyed the rule of law. Also it is systematically violating the fundamental rights and liberties of the citizens of the country,” Colombian Foreign Affairs Minister Carlos Holmes told The Epoch Times in an interview. He added that reestablishing democracy and upholding the constitution are essential for restoring the well-being and liberty of Venezuelans.

“For this reason countries in the Lima Group are adopting political and diplomatic means, in accordance with international law, to support the efforts of Venezuelan democrats in this course.”

Once-rich Venezuela is currently facing serious, widespread food and medicine shortages, hyperinflation predicted to reach 1 million percent, and brutal human-rights violations after over a decade of failed socialist policies. Three million—or 1 in 12 Venezuelans—have fled the nation since its collapse in 2015 in one of the biggest migration crises in Latin American history.

It has consistently criticized human rights abuses and a loss of democracy in the OPEC nation, implementing some measures to ratchet up pressure on the ruling regime.

The latest sanctions are arguably the strongest from Latin American nations to date in an effort to directly target high-ranking political and military officials which make up the regime’s base.

They include reevaluating loans to the Venezuelan government from “international and regional organizations;” cutting military ties; a revaluation of diplomatic relations—although many nations have already minimized diplomatic ties; denial of entry to Venezuelan officials into other Latin American nations; and an enlargement of the list of Venezuelan officials with which no bank or financial outfit should work with—freezing their funds “if necessary.”

All member nations minus Mexico agreed to the sanctions; it was the first time Mexico refused to endorse a declaration. In an official statement, Mexico’s Deputy Foreign Minister Maximiliano Reyes called for the Lima Group to reflect on “the consequences for Venezuelans of measures that seek to interfere in internal affairs.” Relations between left-leaning President Andres Manuel Lopez Obrador’s Mexico and Venezuela are currently believed to be warming.

‘Sanctions against the regime and its collaborators’

Some analysts have said that international sanctions could lead to a further deterioration of conditions in Venezuela and more suffering for its people.

Representatives of Lima Group members, such as Holmes, strongly reject the claims.

“We cannot be complicit with the dictatorship and the violence and oppression that it exerts on the Venezuelan people, nor of the plundering of Venezuelan resources.”

President Ivan Duque’s Colombia—which neighbors Venezuela—has been one of the most critical and vocal members of the Lima Group against Maduro.

In reaction to the Lima Group’s communique released Jan. 4, Venezuela’s Foreign Minister Jorge Arreaza announced that his government was “perplexed” by the group’s actions, would take office as planned on Jan. 10, and reciprocate diplomatic measures.

Analysts say that despite all Lima Group members bar one agreeing to the sanctions, their impact depends on how each nation will implement them.

“If broadly adopted and implemented, they will further restrict the mobility of members of the government and make it even harder to obtain the fresh finance it so desperately needs,” said Phil Gunson, senior Venezuela and Andes analyst at the think tank International Crisis Group. “That inevitably brings with it additional suffering for the population, but in comparison with the massive damage to public health and welfare caused by government corruption and incompetence, the impact is relatively small.”

Alongside the potential effects for the Venezuelan government and people, the measures mean that state of diplomacy between the crisis-torn nation and many of its Latin American neighbors have reached a new low following tensions that peaked in December when Russian nuclear-jets landed in the country.