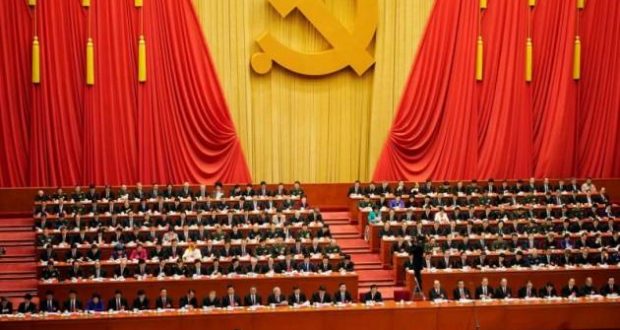 Chinese communist authorities forced a church in China’s Henan Province to take down the first of the Ten Commandments given to Moses, as it was deemed offensive. The move comes as China’s communist regime continues a crackdown on Christians and other religious minorities.

Bitter Winter Magazine, which reports on religious freedom violations in China, said that the incident occurred in November, when 30 officials conducted an inspection of a government-approved Three-Self church in Henan’s Luoning county.

Inside the church, they saw the Ten Commandments displayed on the wall, and declared that the first commandment must be removed and proceeded to wipe it off.

The Ten Commandments, given by God to the Jewish people through Moses, became the bedrock of morality in the Abrahamic faiths, including Christianity.

The first commandment, recorded in the book of Exodus, quotes God’s words directly: “I am the Lord your God, who brought you out of Egypt, out of the land of slavery. You shall have no other gods before me.”

The leaders of the church, which wasn’t named, reportedly strongly opposed the action of the government officials.

“This isn’t appropriate. They’re falsifying the words of God! It’s resisting the Lord!” one believer said.

One of the officials explained, however, that Chinese President Xi Jinping “opposes the statement,” referring to the first commandment.

“Who dares not to cooperate? If anyone doesn’t agree, they are fighting against the country,” the official warned. “This is a national policy. You should have a clear understanding of the situation. Don’t go against the government.”

The church was forced to take down the Ten Commandments sign that day.

Numerous stories of Communist officials shutting down churches, arresting congregations, and even trying to rewrite the Bible emerged throughout 2018, following the implementation of revised religious regulation rules in February.

Bob Fu, founder of ChinaAid, said at a U.S. House of Representatives hearing in September that part of the initiative to “Sincize” Christianity, or make it more compatible with the state ideology, include retranslating the Old Testament. The Chinese government also plans to provide new commentary for the New Testament, using Buddhist scripture and Confucian teachings to champion socialist ideals.

“There are outlines that the new Bible should not look westernized and [should look] Chinese and reflect Chinese ethics of Confucianism and socialism,” Fu told The Christian Post at the time.

Persecution watchdog groups, such as Open Doors USA, have condemned the proposed plans.

“The Church in China needs to move out of the passive zone and be actively integrating their faith into every part of their walk in China, including standing up if the Chinese government decides it wants to edit the Bible,” Open Doors CEO David Curry said in October.

“I think we have to call it out. I think it’s an issue of prayer and letting people know in the global community, that we’re aware,” he added.

“Whenever Christians are persecuted, we need to stand up and let our voice be heard.”