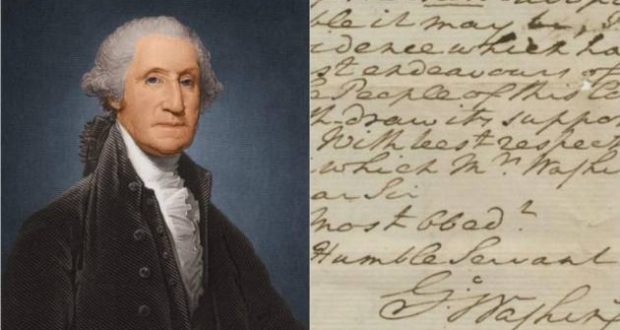 In an age when secularists try to remove God from the public square and deny the role faith played in our founding, a letter is revealing just how much credit those founders gave God.

After spending decades out of the public eye in a private collection, a letter written by George Washington about God and the Constitution is up for sale.

The letter from Washington to Richard Peters, speaker of the Pennsylvania General Assembly, and a former member of the Continental Congress, is signed Sept. 7, 1788.  In the document, Washington praises God for the ratification of the US Constitution, which had been written in Philadelphia a year before.

Washington’s letter was written at a time when states were questioning the Constitution. Some even wanted to hold a second convention to possibly rewrite it.
Here’s the letter:

I have received advice which appears to be direct, that the Legislature of this State has determined on a draft from the Militia to serve for the Campaign under their own Officers, instead of being incorporated with their Continental battalions. This mode if adopted, will be attended with so many inconveniencies, if followed by the States in general, will be so absolutely pernicious to all the prospects of the campaign—that I cannot forbear taking the liberty to send Brigadier General Knox to represent on my part the ill consequences of the measure, and the superior advantages of the plan recommended in preference. I entreat Your Excellency to procure him the honor of a conference with the Legislature for this purpose. The crisis is so delicate and important—the honor and interest of these States so essentially depend on a judicious and vigorous exertion of our resources at this juncture—that I cannot but manifest my anxiety when I see any measures in agitation that threaten the disappointment of our hopes, and take every step in my power to prevent their being carried into execution. In military questions the Officers of the Army have a right to flatter themselves their country will place some confidence in their experience and judgment and it is the policy of every wise man to do it. I cannot doubt that on reconsideration, the zeal and wisdom which have distinguished the Councils of this State will embrace what the true interest of America on this occasion demands.

I have the Honor to be with every sentiment of respect & esteem, Your Excellency’s Most Obedient & Humble Servant

“It would seem from the public Gazettes that the Minority in your State are preparing for another attack of the – now – adopted Government; how formidable it may be; I know not,” Washington wrote. “But that Providence which has hitherto smiled on the honest endeavors of the well-meaning part of the People of this Country will not, I trust, withdraw its support from them at this crisis.”

The letter is priced at $140,000 and is being offered by historical document dealer The Raab Collection.

“Washington, who was the General in Chief of the Continental Army during the war and President of the Constitutional Convention makes a remarkable statement in this powerful letter: his victory in battle and his stewardship over the Convention that led to our Constitution came with the guiding influence of a higher power,” Nathan Raab, president of the Raab Collection, said in a statement.