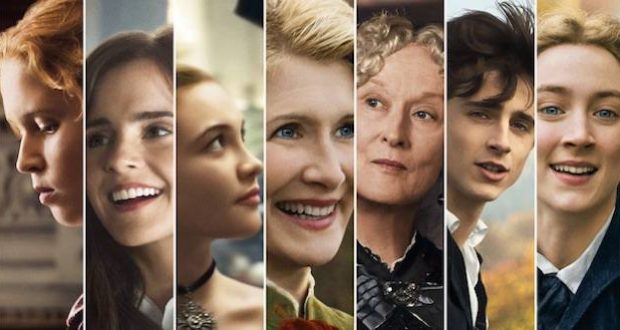 It’s not your typical Christmas blockbuster but it’s no less anticipated by many who prefer good dialog and stories over special effects. Little Women, now showing, is getting kudos for a storyline based on biblical values of kindness, charity, and selflessness but with a modern energy.

Published in the late 1860s, Louisa May Alcott’s coming-of-age book Little Women tells the story of four sisters on the brink of womanhood: Meg, Jo, Beth, and Amy March. Under the watchful eye of their beloved mother, Marmee, the March sisters navigate love, friendship, loss, hopes and dreams in the aftermath of the Civil War.

Throughout the film, Marmee models biblical values for her four daughters.

Award-winning actress Laura Dern stars as Marmee, the March family matriarch. Kind, loving, and quietly strong, Marmee is the family’s rock and moral compass, holding her family together while her husband is away working as a chaplain during the Civil War.

Throughout the film, Marmee models biblical values for her four daughters. She gently reminds a defiant Jo to “not let the sun go down on your anger,” (Ephesians 4:26), feeds the poor and widowed, and silently prays over her ailing daughter.

“Motherhood is profoundly spiritual, whatever that is for anyone,” Dern said of her character. “You’re diving as deep as possible to find the truth, or certainly Marmee is, and from that place, hopefully inspiring your girls to be truthful about who they are.”

“Real spiritual connection is about being who you are and being honest and being messy and complicated and having faith in that being your gift to the world, not withholding or suppressing,” she said. “I love that this story is about a mother honoring her girls for being all that they are. And that’s revolutionary and very modern, I think.”

Alcott famously based her book’s protagonist, Jo, on herself. Independent and fearless, Jo defies Victorian expectations of what it meant to be a woman. An aspiring writer, Jo, like Alcott herself, feels the burden of caring for her family — even selling her own hair to a wig-maker to cover Marmee’s travel expenses.

Jo is played by Academy Award-nominated actress Saoirse Ronan, who stated she was drawn to her character’s fierce loyalty to her family and determination in the face of overwhelming odds.

Go behind the scenes in the movie:

“I think often you’ll gravitate toward roles that you can sometimes see yourself in, the good points and the bad points,” Ronan said. “But then also they may have things about them that you would like to be, that you would aspire to be. I liked that she was as driven as she was and she was protective over her work. That was sort of everything to her, but it stemmed from something very genuine and authentic, which was her family and her love for her family. I liked that, at the end of the day, [her family] would always be her inspiration.”

Beth, the third March girl, is shy, musical, and sweet — and tragically meets her death after contracting scarlet fever. Alcott based Beth on her second-youngest sister, Lizzie, who also died from the disease.

Australian actress Eliza Scanlen, best known for her role on the HBO series “Sharp Objects,” brings Beth March to life. According to Scanlen, Beth is easily one of the most misunderstood characters in Little Women.

“Beth his not just a young girl slated for death; she doesn’t surrender to it,” Scanlen said. “I think she’s quite angered by her death and finds a way to accept it. And as a result, she has some kind of spiritual advancement and this really profound understanding of the world and her fate. That was something really interesting to tap into.”

According to Scanlen, Beth, a talented pianist, is an “artist in the truest sense.”

“She doesn’t have any ambition that requires her to venture out into the public sphere to kind of showcase her work,” she explained. “It’s something that she’s happy sharing with her sisters and keeping it a sacred part of their family, which I find really lovely.”

Amy March, the youngest of the bunch and one of the most polarizing figures in Little Women, is played by newcomer Florence Pugh. Initially selfish and vain, Amy grows to become an accomplished and poised artist. Practical and determined, Amy seeks to break out of poverty — and for a woman, as Aunt March (Meryl Streep) continually reiterates — that means marrying a wealthy man.

In Gerwig’s adaptation of Little Women, Amy is given the opportunity to be “passionate and brave and to have ambition” and for the audience to “quite clearly see that she made a choice,” Pugh said. That choice, she added, was rooted in “safety and looking out for the future of her children.”

“That’s kind of the decision that she makes between studying or marrying rich, which is the complete opposite to Jo,” Pugh said, adding: “It was so much fun playing these sisters with all of these girls.”

Previous: Kanye West drops another new album: ‘Sunday Service: Jesus is Born’
Next: Book by local author explores the ability to find peace in Christ after series of losses