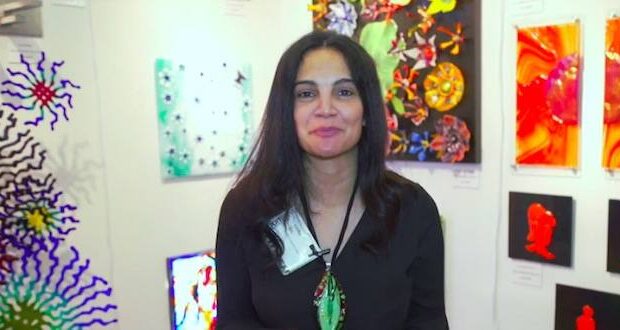 “I wanted to put pictures into poems, give voice to a visual,” says Hasna Sal of her new book, Poems In Glass. The visuals are turning heads.

Her book launch was recently held at Westport Presbyterian Church and featured both the book and her sculpted glass art, including a version of the Into The Light memorial for human trafficking victims.

Published by Flying Ketchup Press, Poems in Glass is divided into four segments: Sanctuary, Sanctum, Spirit, and Synchrony. Writing the book took Sal a year and a half, and then the publication process took an equal amount of time. 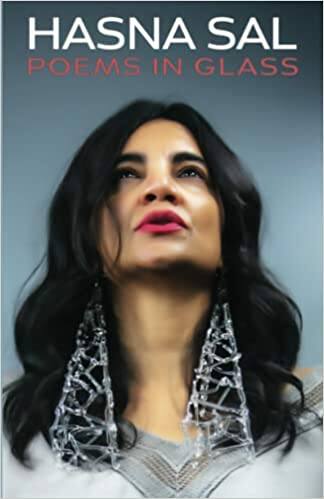 “I was on an airplane flying to New York for an art installment. I was writing verses for the art pieces that were going to be presented. That is something I do for all of my artwork. I sent the verses to a friend, Dr. Kevin Vogt. He was impressed with the verses and thought other people would enjoy reading them. That was when I was inspired to write the book,” said Sal.

Once she had completed the book, she researched publishing houses.

“I knew when I found Polly Alice McCann, Managing Editor at Flying Ketchup Press, I knew this was the publisher I wanted to work with; her poetry and art is well-known and respected. I knew she was the person I wanted to publish my work. She’s held my hand through this entire process guiding me and I am so grateful,” shared Sal.

Although it was sharing the verses she’d written on the plane for her installment in New York that inspired the book, poetry was something that had always been a part of Sal’s life.

“I’ve been writing poetry since I was a child in India. It is my therapy, my truth. It is raw and unrefined. I presented my work to Polly simply as I had written it. She was given it as complete carte blanche. She didn’t change a word. However, she did offer constructive criticism on how to shape the poetry, moving stanzas in different sequences. I am a terrible editor of my own work. When I try to change or alter something, I feel that I have lost the soul of my work. When Polly gave me guidance, it worked,” said Sal.

Of Sal’s work, McCann says, “Poems In Glass is a uniquely original book, part memoir part revelation. Through the panes, poems, and practice of glass art you find the heart of a poet in Hasna Sal. Hasna’s lyrical verse harkens back to the form of Sufi poets, with the warmth of bygone days where color brings visceral emotion and therapeutic energy to the body and mind. Color is the elixir of life. Hasna’s poetry allows color to serenade her narratives through art and verse.”

Sal is an Architect by profession and a U.S. Citizen. She pursued her early education in Mumbai and continued it further in the Middle East, the United Kingdom, and then the United States.

“I studied fine art in England and Wales for four years, dabbling in a myriad of media including pastels, water colors, oils, acrylics etc. I then relocated to Boston, Massachusetts, completing a five year NAAB-accredited professional degree program in architecture,” stated Sal.

In 2002, Sal relocated to Kansas where she worked as an architect and taught design studio at the University of Kansas.

“Here I confronted a new frontier of my career—the craft of glass sculptures. Since 2004, I have been sculpting glass in various shapes, forms and sizes. In 2010, I was accepted into Harvard for a postgraduate degree in landscape architecture. My education at Harvard gave me a greater understanding for the natural world and I translate my observations into my sculptural forms,” said Sal.

Working from her Kansas City studio, her work is shown in a Johnson County home gallery as well as various art shows and competitions throughout the United States and worldwide.

Her Nativity triptych, a 600-pound nativity scene of Jesus, Mary, and Joseph gained national attention, as did her glass-panel memorial for human trafficking victims in Lykins Square Park, which was unveiled in October of 2020.

“After the Nativity piece, I felt two things very strongly: Christ will protect the innocent, and when something good happens, it brings the world together. I wanted to bring the church and spirituality into the park. I wanted to associate glass with spirituality and Godliness,” explained Sal.

Sal believed that the Nativity piece (now displayed at the University of St. Mary in Leavenworth, Kan.) had to have been created first because it was what then led her to the Lykins Park project (Into The Light) after reading a book written by a sex trafficking survivor, Christine McDonald (Cry Purple).

“I felt absolutely compelled to do something. As an artist, I felt I had the responsibility to be an advocate of change. Color, light, and social awareness is the focus of my work. I concentrate on social reform through the application of color and light in my sculptures in articulating my narrative. The phenomenological response to layers of filtered light and shadow in the environment is my rhetoric,” stated Sal.

However, when comparing her art to poetry, Sal sees a great difference in the two mediums.

“Art is a multi-layered process, and has a scientific technique to creating it. Poetry is just me. Poetry to me is like meditation. It reminds me of my grandfather kneeling on his prayer mat in India. I pick up my pen and start to write what I am feeling, and I don’t stop and put the pen down until that feeling and thought are completed. Once the poem is written, I don’t touch it again. The words flow through me in verses. I feel like I have broken something if I change it. It’s like I’m dressing it up to be something else,” said Sal.

That ritual, however, does not always lead to a successful poem.

“I like to sit back in my recliner and let the pen flow; however, sometimes poetry just comes to me. I wake up in the middle of the night and I’m scratching things down on paper or napkins. I wake up in the morning and read what I’ve written from the night before. Sometimes you get an Ah-hah moment, and sometimes it is pure rubbish and goes straight into the trash,” explained Sal.

Sal credits her graduate work in landscape architecture from Harvard with the foundation of her current work in glass sculpture. She apprenticed with artists in England and Wales, and earned her five-year NAAB accredited professional degree program in architecture at the Wentworth Institute of Technology in Boston. She also has a diploma from the London School of Journalism.

“I identify myself as the raconteur; bringing to light stories that are overlooked or forgotten or uncomfortable. Sharing these stories creates awareness of the problem, which in turn facilitates the platform for conversations and resolutions to take place,” said Sal.

It is a goal that she strives to accomplish not only through the use of her art, but now through her poetry, too.

Poems In Glass, and may be purchased at www.flyingketchupress.com or below

Metro Voice is an Amazon affiliate and your shopping supports our work.