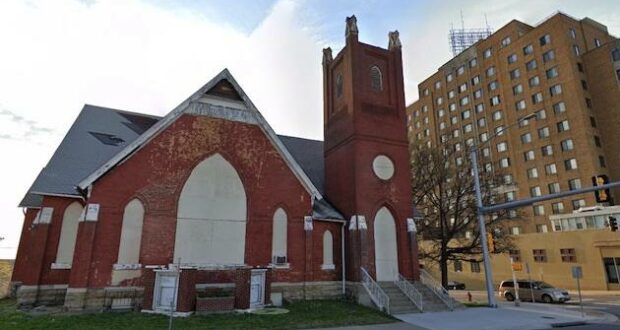 The abandoned but historic Seventh Street Methodist Episcopal Church in Kansas City, Kan., stands in the way of a new educational center being built by KCK Community College.

“This is probably the last example in our city, and probably one of the few in the metropolitan area, of what they call High Victorian Gothic architecture,” Jim Schraeder of the city’s Landmarks Commission told KCUR Radio. “See the frou-frou woodwork, the gingerbread on all the arches?”

Schraeder and other preservationists believe it is possible to preserve the entire church, but college officials say the footprint of the entry will be bigger than the church area and renovating would cost too much.

The structure has been abandoned for decades and allowed to decay. It sits at the corner of Seventh St. and State Ave. in downtown Kansas City, Kan. A chain-link fence surrounds the tall grass and weeds that have grown on the property, the white paint is peeling from the eaves of the church and a small tree grows out of the bell tower, which is missing its steeple. The icon of the city’s skyline was destroyed in a storm in 1945 and never replaced.

The new facility is designed to address the community’s economic challenges, notably, high rates of poverty and unemployment. College President Greg Mosier said officials began looking at the downtown expansion about two years ago after studying disparities between the population in eastern and western Wyandotte County.

“There is a 200 percent increase in people who are working full time and living in poverty when we go to the eastern side of the county,” Mosier said. “There are great jobs out there; our problem is we don’t have a skilled work force that is ready to obtain and maintain those jobs.”

Records indicate the last congregation to use the church was the Faith Cornerstone Church of the Full Gospel, but it’s unclear when it held its last service.