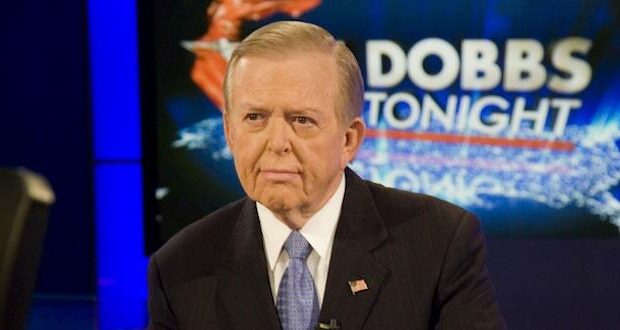 One of the most outspoken conservatives on Fox News has had his show canceled. The Los Angeles Times reports that Lou Dobbs Tonight, which had some of the highest ratings on the Fox offshoot Fox Business had been on air since 2011.

The announcement was confirmed by a Fox News spokesperson.  Fox Business Tonight will replace Dobbs’ nightly program, with rotating substitute hosts David Asman and Jackie DeAngelis next week. Dobbs remains under contract with Fox News, but he “will in all likelihood not appear on the company’s networks again,” per the Times.  Dobb’s show has been scrubbed from the Fox website.

Dobbs — one of the industry’s most well-known veteran TV news anchors, came to Fox from CNN where he was a fixture for three decades. Under the unprecedented economic boon under President Donald Trump, Dobbs became a cheerleader for economic policies he felt were lifting millions of Americans into the middle class – particularly people of color. The Trump economy saw record employment among all levels of American society it was most historic for black and Latino communities. Women also saw historic job numbers before the Chinese coronavirus put a halt to the economic expansion. Dobbs was also one of the most vocal critics of the legitimacy of the 2020 election.

The host, known for his gravely voice, regularly interviewed statisticians, data security experts, state representatives from swing states and attorneys who shared evidence of what they believed proved irregularities in how votes were counted after poll workers went home in four separate counties. Those counties in Pennsylvania, Michigan, and Wisconsin were what ultimately gave Biden the victory in the overnight hours.

“As we said in October, Fox News Media regularly considers programming changes, and plans have been in place to launch new formats as appropriate post-election, including on Fox Business,” a network representative said in a statement to the Times. “This is part of those planned changes. A new 5 p.m. program will be announced in the near future.”

Fox News and CNN have seen a dramatic loss of viewers since election night. Fox dropped to number 3 in the ratings after having held the top slot for several years and Arbitron ratings this week show that CNN has lost 40% of its viewers since the inauguration.

Previous: Royal purple fabric could be from household of King David
Next: The new $15.7 billion tax on retirement accounts