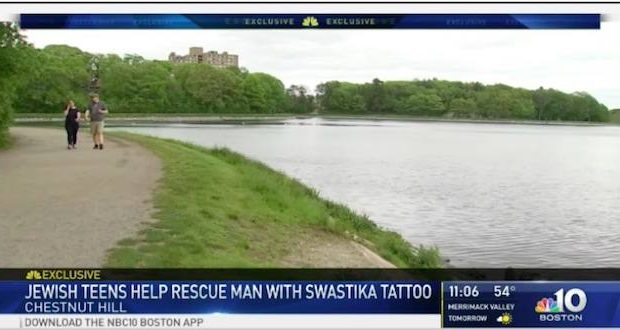 A man with a Nazi swastika tattoo would have drowned were it not for a group of Jewish teenagers in Massachusetts.

The young Yeshiva boys were walking around the Chestnut Hill Reservoir when they found a man partially submerged in water and not moving.

They quickly notified patrol officer Carl Mascioli about what they found.

“As I approached them, two of them ran up to my car,” Mascioli told Boston 10. “There was a body in the water.”

The officer went to pull the man out of the water.

“While I was pulling him out of the water, I also observed that he had a swastika on his hand,” said Mascioli.

The Jewish teens had unknowingly saved a man with a Nazi symbol tattooed on his body.

The boys, who desire to remain anonymous, wanted to make sure the man knew who had rescued him.

“They wanted just to let him know that it was four young Jewish boys that helped save his life,” recalled Mascioli.

He said the boys did not regret helping a man with a Nazi tattoo.

“A good deed is a good deed and that’s part of life. We should be helping everybody out,” Mascioli said.

It is unknown how exactly the man ended up in the water. Police say he would have died had the officer and teens not found him.

He is expected to make a full recovery.

Previous: Area beaches closed because of flooding
Next: How much do you know about Memorial Day?