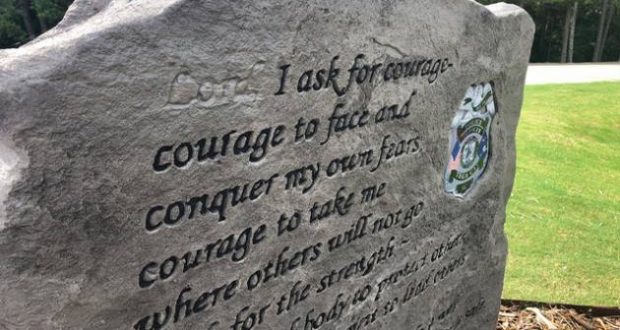 A memorial marker honoring fallen police officers in Tega Cay, SC recently stirred a huge controversy because it mentioned God – then God was removed, kicking off another fight.

The memorial stone was erected at the local police station on July 12, but city officials modified it to cover up all mentions of God after offended residents flooded their office with complaints. Now they’ve completely taken it down.

Originally, the back of the marker was inscribed with a scriptural message where the word “Lord” was used three times. The marker was also engraved with the Bible verse Matthew 5:9. Blessed are the peacemakers, for they will be called children of God.

Tega Cay City Manager Charlie Funderburk told states, “The word ‘Lord’ was completely removed from the marker, along with the Bible verse on the back.”

“Removal of the religious references were more about trying to find a compromise between the two sides. We tried to find a common ground to stand on, but the intention was never to offend anyone,” Funderburk said.

The city received a second wave of disapproval from Christian residents who support officers after “Lord” references were deleted from the memorial.

“There was polarization on both sides of the discussion. It was in everyone’s best interest to remove the marker and place it in storage,” Funderburk said.

The city is reviewing the feedback they’ve received and will decide what is in everyone’s best interest.

“The fate of the monument remains to be seen. We are a community accepting of all people,” Funderburk added.