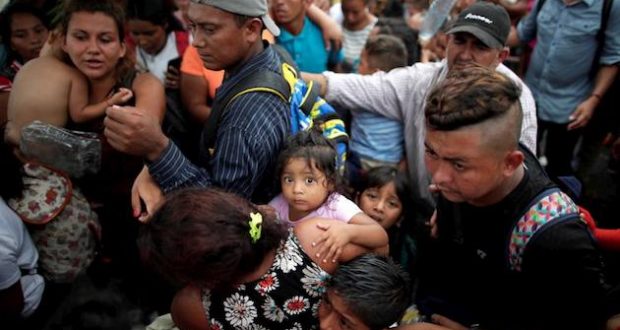 Children traveling in a migrant caravan are vulnerable to disease and should be protected, Oaxaca’s Human Rights Ombudsman, Arturo Peimbedrt, said on Oct. 29.

Some of the children are unaccompanied, while others are traveling with parents or strangers. The Mexican government over the weekend offers all migrants jobs and free medical and education if they would abandon the dangerous journey. While 1,500 migrants took up the offer, most did not.

At dawn on Monday, the Central American migrants shouldered their bags and started heading north, towards the United States. Their goal for the day was the town of Santiago Miltepec, located in the southern Mexican state of Oaxaca.

News video now shows most of the migrants hitching rides on the back of flatbed trucks or packed pick-up trucks. In one scene a little girl was seen squashed in between adults, with the look of horror on her face.

An estimated 2,000 children traveling with the migrant caravan, urgently need protection and access to essential services like healthcare, clean water, and adequate sanitation, Peimbedrt warned. Disease has been spreading through the group since they left their respective countries across Central America.

“Many have a fever. They are having acute bronchitis and respiratory problems. We estimate there are more or less 2,000 children who are traveling with this caravan. Some 500 are very, very young. It’s not only the problem with transportation, but we’re making a call to highlight the dimension of the crisis we are facing. That is why it is very important that the Mexican state determines what will be the model for attention for this population but mainly the population of girls, boys, and teenagers who are migrating,” he said.

The long and arduous journey has left children exposed to inclement weather, including dangerously hot temperatures, with limited access to proper shelter. Some have already fallen ill or suffered from dehydration, according to UNICEF teams on the ground.

Estimates on the size of the caravan vary from around 3,500 to more 10,000. Some migrants have abandoned the journey, deterred by the hardships or the possibility of making a new life in Mexico. Others joined it in southern Mexico.

The news of the toll of disease on the children suffering for the decisions of the adults in their lives comes as the U.S Military announced it would send an additional 5,000 military personnel to aid in protecting the border from unlawful breaches. That would bring the total number of troops to approximately 7,300