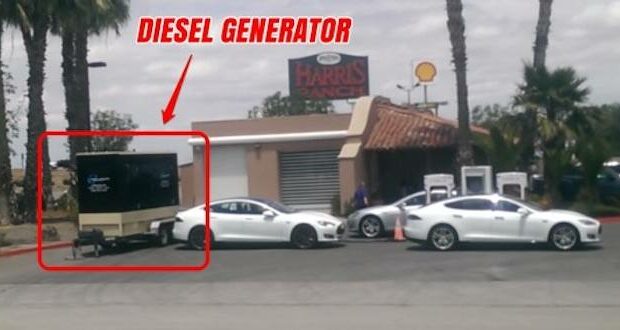 Tesla's being recharged by a diesel generator running a charging station.

The department will hold 10 public hearings on unfunded highway needs, seeking input on how to use the new funding. In addition to the $6.5 billion for road needs, the state expects to receive $484 million over five years for bridge replacement and repairs. Other items in the infrastructure funding include:

One project on the unfunded needs list is $62 million to partially reconfigure the U.S. 63 and I-70 interchange in Columbia. That congested intersection has created bottlenecks for decades and previous changes have not relieved the traffic tie-ups. The project, when finished, will make the intersection ready for three lanes of traffic, McKenna said

The infrastructure funding is dedicated to specific needs, but Missouri also is sitting on billions with fewer restrictions. At the end of October, the state was holding $1.34 billion from the American Rescue Plan signed by President Biden in February and more than $2 billion in surplus general revenue from state income and sales taxes. The department will ask lawmakers for some of that money.

The water infrastructure spending in the bill, the second-largest allocation for Missouri, will be used to make more funding available through loan and grant programs operated by the Department of Natural Resources. Missouri has the sixth-most lead service lines, the pipes that carry water from water mains into residents’ homes, of any state.

Critics have questioned the expenditure for charging stations for electric cars. Many say the stations should be built and funded privately like gas stations and convenience stores and wonder why the government is getting in the way of private business.

President Biden is highlighting billions of dollars in the infrastructure deal to pay for the installation of electric vehicle chargers across the country, an investment he says will go a long way to curbing planet-warming carbon emissions while claiming to create jobs. Biden administration officials have blamed rising gas prices on the lack of electric vehicles.

According to Spectator.org, electric charging stations will only charge a vehicle about the same as a third tank of gas, which means more stops to charge. “You are being sold on something you probably wouldn’t buy, if you knew what you were buying. EV pushers want you to think you are buying something else — something that makes sense. But if that were the case, why don’t they give you all the facts?” the article asks.